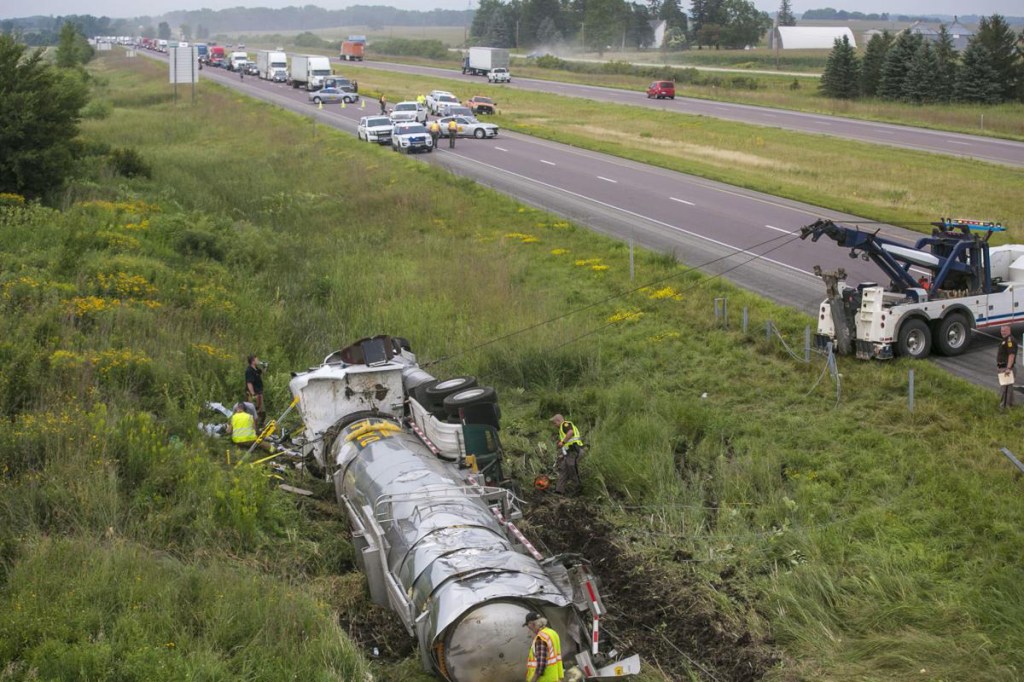 Iowa State Patrol, Mason City and Northwood Fire departments respond to a two-semi collision at the 217 mile marker on Interstate 35 in Worth County on Tuesday. One man was transported to the hospital. Chris Zoeller/Mason City Globe Gazette

2 semis collide on I-35 after 1 semi crosses median

Blown tires were the cause of two separate crashes in the area Tuesday afternoon and Wednesday morning that injured two people.

In the first, a California man was injured after two semis crashed Tuesday afternoon on Interstate 35 south of the Minnesota and Iowa state line in Worth County.

Marvin Hagan, 58, of Fresno, California, was flown by helicopter to Mercy Medical Center North Iowa in Mason City, according to the Iowa State Patrol.

His condition Wednesday morning was unknown.

The report states Hagan was driving a 2012 Peterbilt semi northbound at the 217 mile marker when one of the steer tires on the semi blew, causing the semi to go into the median.

The semi reportedly came up on the southbound side of the interstate, where it was struck by a 2015 Volvo semi, driven by Jacky Paschal, 44, of Hinesville, Arkansas.

The Peterbilt semi flipped on its side and landed in the southbound ditch.

Paschal was not injured.

The crash was reported at 4:25 p.m. Traffic was backed up for several miles as authorities responded.

The Worth County Sheriff’s Office, Mason City and Northwood fire departments, and Iowa Department of Transportation assisted at the scene.

In the second crash, 57-year-old Karen Kay Black of Algona, Iowa, was taken by ambulance to Mayo Clinic Health System in Albert Lea for injuries deemed not life-threatening.

According to the Minnesota State Patrol, Black was driving a 1999 Dodge Caravan northbound on I-35 south of Albert Lea at 8:26 a.m., when the van blew a tire and Black lost control of the vehicle.

The van entered the median ditch and rolled through the median onto the southbound lanes.

The report stated Black was wearing her seat belt, and alcohol was not a factor.