Candidate for Minnesota Attorney General Doug Wardlow hopes to help combat human trafficking and opioid abuse if he is elected. 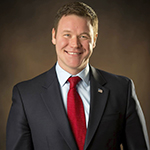 “It’s going to take a comprehensive strategy and statewide leadership to effectively combat these problems, and that hasn’t happened,” he said.

Wardlow, 40, of Prior Lake said a multi-faceted approach is needed to end the opioid crisis.

“To prevent opioid abuse, we’re going to have to have a comprehensive strategy in place,” he said. “And that means putting resources to the problem, that means working with and collaborating with state and local law enforcement to combat opioid pushers, that means working with county attorneys to do the same thing and just getting all of those partners together and coming up with a plan.

“It’s going to take a comprehensive strategy and statewide leadership to effectively combat those programs, and that hasn’t happened.”

Wardlow took issue with what he said has been the lack of commitment the Attorney General’s Office has given to county attorneys.

“Our county attorneys lately haven’t been getting any backing from the Attorney General’s Office,” he said. “The Criminal Law Division of the office has basically been eviscerated by the folks who have been in charge for the last 20 years.”

Wardlow is competing for the GOP nomination for attorney general against Sharon Anderson and Bob Anderson, a Minnesota state senator from 1977 to 2003.

To Wardlow, excessive state regulations are impacting businesses and farmers, adding if elected, he would advise state agencies to enforce regulations without violating the law or the Constitution.

“ I would consult agencies to essentially back off and make sure they are not stepping across Constitutional boundaries,” Wardlow said.

Wardlow has received the Republican Party endorsement for attorney general.

“I am hopeful Mayo Clinic and others can come to a resolution,” he said.

Wardlow said he needs to learn more about the situation before he states a public opinion.

Of President Donald Trump’s recent implementation of a plan that separated more children from parents at the U.S.-Mexico border that he ended with an executive order, Wardlow said it was not ideal.

“Like everybody (else), I don’t want to see families separated from their children,” he said. “That’s terrible. I’m hopeful that Congress ultimately will come up with a solution that fixes the problem … but it’s also important that we enforce our immigration laws.”

Wardlow called Minnesota joining a lawsuit against Trump’s original ban on immigration from seven Muslim-majority countries enacted at the start of his presidency “inappropriate.” A slimmed-down version was recently upheld by the U.S. Supreme Court.

“I think it was baseless, and the Supreme Court recently vindicated the president by upholding the travel ban,” Wardlow said.