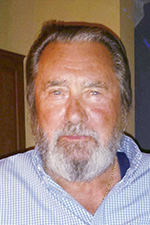 He was born Jan. 18, 1937, in Owatonna to Albert and Leone Dorothy (Fiebiger) Spinler. Dave graduated from Blooming Prairie High School in 1954. Following graduation, he served his country in the National Guard.

Dave married Yvonne Brekke on July 3, 1960, in Hope. During their years together they raised three daughters, Pam, Kim and Cindy. The couple later divorced.

Dave successfully started and owned Spinler Construction for over 50 years. He loved the business he created and loved being outdoors.

On Nov. 23, 1985, Dave was united in marriage to Karen Rae Miller at The Little Brown Church in Nashua, Iowa. They shared many years together until Karen’s passing in 2016.

One of David’s favorite pastimes was restoring John Deere tractors. Especially important to him was time spent with his family and friends. He treasured his time with his daughters, grandchildren and great-grandchildren. He will be dearly missed by all who knew and loved him.

Dave was preceded in death by his parents Albert and Leone Spinler; and his wife, Karen Spinler.

Funeral services will be at 11 a.m. Wednesday at Red Oak Grove Lutheran Church in rural Austin with the Rev. Lindsay Brennan officiating. Visitation will be from 4 to 7 p.m. Tuesday at Worlein Blooming Prairie Funeral Home and will continue for one hour prior to the service at the church Wednesday. Interment will be at a later date. Military rites will be handled by the Blooming Prairie honor guard. In lieu of flowers, memorials are preferred to the family. Worlein Blooming Prairie Funeral Home is assisting the family with arrangements. Condolences may be expressed to the family online at www.worlein.com.