Dick Herfindahl: There is a small hinting of fall in the air already 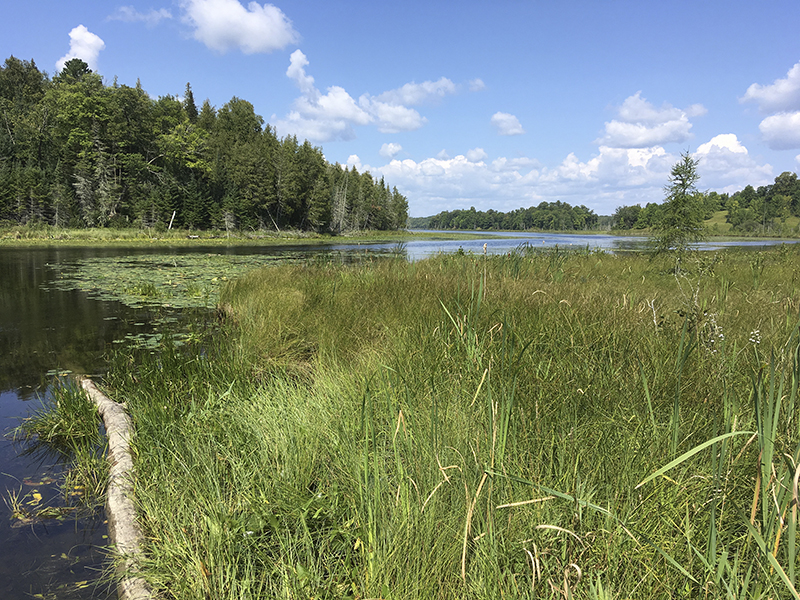 The area of northern Minnesota from Grand Rapids north is full of beautiful little lakes like Bello, which boast an abundance of bass, walleye, pike, panfish and most other species for fishermen to enjoy. If you like the colors of autumn, then you will enjoy a fall trip to this area of the state. - Provided

I have been fortunate enough to sneak in a few days up at our cabin this past week. The weather has been pretty cooperative for the days that I have been here even with the air advisory that has been in effect for the bulk of the time. This is thanks mostly to the forest fires in northwestern Canada. There is definitely a smoky haze that has pretty much lingered the whole time that I have been up here, but a steady breeze has made it tolerable.

The days have been warm and the nights cool, which is the perfect mix for this time of year. Some of the softwood trees like maple and aspen have started to turn colors already which, even to me is, all too soon. Nonetheless, there is a definite feel of fall in the air in the northern part of the state. I did lose a little bit of my summer after being laid up with some health issues. I still have some lifting restrictions, so even a task as simple as buying some black oil sunflower seeds for the bird feeders became a challenge. It seems that the common deal for those seeds is to sell them in 50 lb. bags, which is a good deal if you don’t have restrictions. I finally found it sold in a smaller amount at the grocery store in Bigfork.

On my way back to the cabin, I decided to drive to a couple of the accesses on a few lakes just to check them out and wet a line. This is something that I like to do from time to time when I don’t want to or in this case couldn’t use one of my boats that I have at the cabin. It was a gorgeous day for it and I managed to do a little fishing at the accesses of three different lakes. I have one full day left before I have to head back home, so I will check out a few more lakes tomorrow. I talked to a couple of fisherman who were launching their boat at the Bello Lake access and they said that fishing had been pretty slow for them so far this week. August can be a tough fishing month, so you sometimes need to change tactics and try new things. I am still a firm believer in the theory of walleyes in the weeds in late summer. Finding them is still the challenge.

In speaking with these two guys, I found that we had a lot in common. They like to travel to different lakes and try their luck by fishing more than one lake in a day. They chose to fish this area because of the abundance of lakes to choose from. While we were exchanging fish stories an eagle flew overhead, something that I always take as a good sign whenever I am on a lake, so maybe they had some good luck on Bello.

I have mentioned many times before of how I love to watch the birds at the feeders. The finches seem to have found another place to eat their meals, however, the black capped chickadees and nuthatches sure seem to be enjoying the cuisine. There are numerous hummingbirds at their feeder while a pair of downy woodpeckers visit the suet feeder periodically.

As I lay in bed last night, I could hear the loons calling to each other. Maybe they were discussing the upcoming storm that came suddenly this morning. During the night, I was awakened by the howling of a coyote that I suspect was just down the hill from our cabin. We have racoons which visit almost every night and are caught on the trail cameras along with deer, fox with a woodchuck that has now appeared on the scene. We also now have seemingly acquired a cat that appears on that trail cam almost every night. I was about to ask my wife the question from the Cheetos commercial, “when did we get a cat?” It has appeared on the cam when none of the other neighbors are at their cabins so it must be a feral cat.

I do plan on getting up to the cabin a couple of more times before the snow flies. It seems like summer takes forever to get here and then, after a blink or two, it is disappearing into the flurries of winter.

Until next time, enjoy the outdoors and maybe even take a little time to hang out by a lake and do a little fishing. Fall is a great time to visit a nearby lake for a picnic or take a day to just enjoy the great Minnesota outdoors.

Please remember to keep our troops in your thoughts and prayers, because they are the reason we are able to enjoy all the freedoms we have today.