Donald Arthur Gerber, 83, of Wells died Monday, Aug. 13, 2018, at his home. A memorial service will be at 11 a.m. Friday at Open Doors United Methodist Church in Wells. The Rev. John Mitchem will officiate. Visitation will be two hours prior to the service at the church Friday. Interment will be at a later date at Rice Lake Cemetery in Foster Township, Faribault County. Bruss-Heitner Funeral Home in Wells is assisting the family. To leave an online condolence, visit www.brussheitner.com. 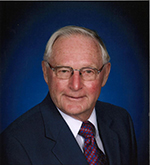 Donald Arthur was born Sept. 5, 1934, in Foster Township, the son of Arthur and Elizabeth (Huper) Gerber. Don graduated from Kiester High School in 1955. He married the love of his life, Jaunice Wegner, on July 10, 1955, at Grace United Methodist Church in Kiester. Together, they had four children: Robert, Linda, Jeanne and Betty.

Don was a lifelong farmer and moved into Wells after retiring. Donald and Jaunice loved to spend winters at Carriage Manor in Mesa, Arizona. Donald was a 4-H leader and was a member and treasurer on the church council. Donald loved farming and gardening. Some of his favorite hobbies were golfing, bowling, waterskiing and dancing.