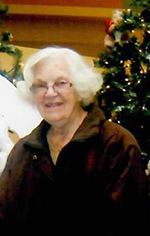 Edna was born Aug. 22, 1927, in England. She completed her education in England and was married to Lionel Royce Hill.  While in England, Edna was a leader of a youth group called the Brownies — a leading charity group for girls and young women.

Edna and Lionel emigrated from England to the United States in 1985, settling in southeast Minnesota. They lived in the Hayward area and owned and operated Railway Arms Cafe. Since moving to Austin, Edna worked as a volunteer at Pickett Place and was a longtime employee and volunteer with Mower County Historical Society.

She loved to cross stitch and to share her efforts with family and friends. She also painted ceramics and loved her flower garden, but her pride and joy was her great-grandson, William, and the time spent with him while he was living in her home.

She was preceded in death by her parents; husband, Lionel; and two sisters.

A celebration of life gathering will be at 1 p.m. Aug. 18 at the Mower County Historical Society Pioneer Building. Memorials may be directed to the family or to a charity of the donor’s choice. Clasen-Jordan Mortuary is in charge of arrangements.