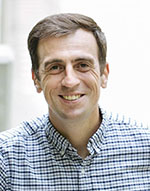 “I’ve been on the campaign trail over a year now — that has been consistently been the No. 1 issue for people — it’s affordability, it’s availability, it’s access,” he said.

Feehan said he does not support the efforts of President Donald Trump’s administration to dismantle the Affordable Care Act, considered one of former President Barack Obama’s signature health care achievements.

“We have to move forwards, not backwards,” Feehan said. “I think any attempts to dismantle what’s there takes health care away. People have benefited from it locally and nationally.

“The idea of going backwards to me — there’s no alternative — are you suggesting that we just go back to the time where less people have health care? That doesn’t seem like a solution to the challenges that we have now.”

Feehan said he supports a reduction of the use of the U.S. military in foreign conflicts and does not support the country’s approach to foreign policy, which he said has resulted in the U.S. being at war for about 17 years.

“Our military is strongest when we don’t have to use it,” he said. “That’s the way it should be.”

Feehan was an active duty member in the U.S. Army and the National Guard as an engineer officer, serving two combat tours during the Iraq War. He was awarded the Bronze Star Medal, the Army Commendation Medal with Valor and the Ranger Tab.

“And they want it to be a check-and-balance at the same time,” he said. “It’s supposed to do its job — if it doesn’t do its job, then people suffer because of it.”

Feehan said Trump’s decision to implement tariffs on foreign products has caused anxiety for farmers. He called on Congress to intervene on the issue and said doing so is important for Albert Lea because of its reliance on farming.

“We have given the executive branch a lot of power in this area, and it’s time to revisit that question, because if the consequences here are going to be so adverse to the people whose livelihood is at stake — yeah, absolutely,” Feehan said.

He expressed concern the country is not paying close enough attention to Russia’s efforts to intervene in the 2016 presidential election. The development has sparked the creation of a special investigation led by Robert Mueller, who is investigating any possible collusion between Russia and the Trump campaign.

“When we’re not focused on those threats, I’m worried about what’s happening there,” Feehan said. “And when we focus on things that aren’t as great as a threat as they’re made out to be — it’s a matter of allocation of resources.”

“The work of those public servants is suddenly valued less,” Feehan said. “The effort that they put in — they know the stakes of it are now valued less, and with that, I’m worried about the damage that does, not just for our credibility as a country, but the credibility of the very organizations that people’s lives depend on.”

Feehan said his Midwest values would help him as an elected official.

“Because of the values I learned here, I’ve been responsible for other people’s lives,” he said. “I’ve been responsible for empowering children in a classroom, and I’ve made policy on behalf of millions of service members in our military. And the weight and wisdom I’ve gained from that is something that I carry with me every day on the campaign trail, because that is how I want to govern, with that wisdom and the idea of just knowing the responsibility that you have as a representative, that my actions or inactions are ultimately the difference between life and death for people.”