Former secretary of state, wife of Walz encourage people to vote in primary 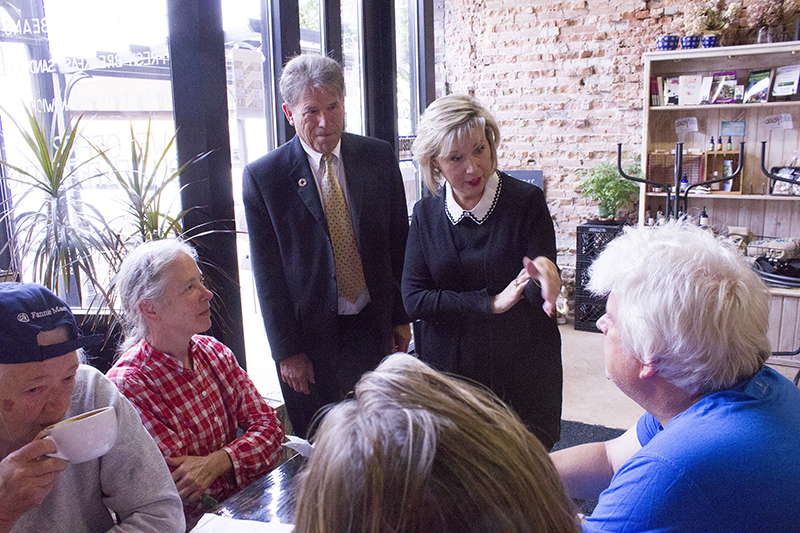 The wife of a leading DFL gubernatorial candidate urged participation in Tuesday’s primary election Monday morning during a brief meeting at The Interchange Wine & Coffee Bistro.

The meeting came eight days before the primary election, which will include gubernatorial, congressional and state representative primaries.

“I just felt it was really important, no matter who people are going to vote for, to participate,” Gwen Walz said.

Jeff Johnson, Matthew Kruse and Tim Pawlenty are competing for the GOP seat.

Brown said it is important to vote in the primary election because the party’s candidates will represent southern Minnesota, adding she has known the Walz family for more than 20 years and taught with them at Mankato West High School.

Ritchie said he met Tim Walz in 2005 at Camp Wellstone. He said during the Great Recession, the congressman “was always a voice for those people I knew were having the most difficulty and were also working the hardest.”

Ritchie said as secretary of state he worked to maintain the state’s voting strength.

“People want to know, is this country mobilized around citizens making the democracy work, or are we just standing back and kind of just seeing what is going to happen?” he said.

Ritchie called voting “one of the most important things that you can do, and it’s coming up.”

“You have to inspect what you expect,” she said. “And I think that’s a good motto to live by.”

Gjersvik, who is expected to face District 27A Rep. Peggy Bennett, R-Albert Lea, in November’s general election, said he met Tim Walz in March at the Freeborn County DFL Convention.

“It is really important that people become civically engaged, and that means voting,” he said. “But prior to voting, it’s hopefully getting to know candidates or reading something about them or looking online. And I think when people do that, or when people see even your ads on TV — they know who you are.

“I think a lot of people around here would consider voting for Tim.”