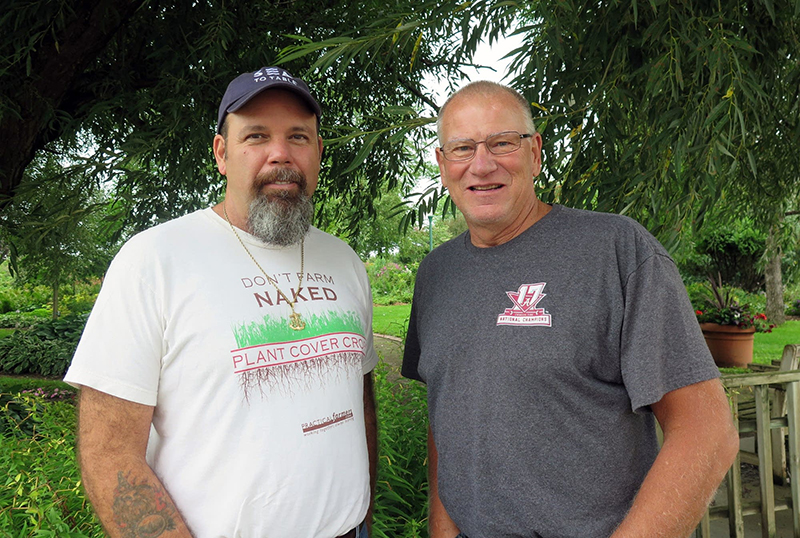 Lance Nacio, left, and Randy Skinner are Gulf Coast shrimp fishermen who traveled to Minnesota last week to talk about the impact of Mississippi River pollution on their industry. - Kirsti Marohn/MPR News

August is the busy season for shrimpers along the Gulf Coast, and fishermen like Randy Skinner and Lance Nacio should be heading out in their trawlers to try to haul in a day’s catch.

But instead, last week Skinner and Nacio traveled more than 1,000 miles north to central Minnesota to share stories about how what happens along the Mississippi River is affecting their livelihood.

Every year, a dead zone about the size of Connecticut forms in the Gulf of Mexico. It’s caused by excess nutrients washing down the Mississippi River — and it has a major impact not only on fish and marine life, but on the people who earn their living on the Gulf.

Local clean water advocates invited Skinner and Nacio to the Brainerd area to talk about that impact. The pair toured a ranch near Staples that uses sustainable farming practices and spoke at a harvest dinner with local farmers at Sunup Ranch near Brainerd.

“I’m here to give my point of view on what happens on the other end of the Mississippi River, because we see the effects of everything that’s coming out of the river,” said Skinner, who began shrimping in Alabama’s Mobile Bay when he was 13. He turns 63 this year.

Nacio owns a shrimp and fish company in southern Louisiana, where his family has been in the business for generations. Despite all those years of experience, it’s getting tougher to make a living in shrimping.

“We have to travel further depending on how bad the dead zone is,” Nacio said. “We get fish kills along the coast where hypoxia is a problem.”

A “dead zone,” also known as hypoxia, happens when nutrients like phosphorus and nitrogen help spur algae growth. When the algae die and decompose, they use up all the oxygen, creating a zone where most organisms — including shrimp — can’t survive.

“It kind of fluctuates from year to year,” Nacio said. “It creates challenges on where we can fish, how far we have to travel to find good water to shrimp in.”

Much of the excess nutrients come from runoff from farm fields. But Skinner said farmers aren’t the only ones to blame.

“Also, runoff from asphalt from the highways, from Walmart parking lots — all of that contributes to a certain amount of impurities entering the Mississippi River and flowing downstream,” he said.

The dead zone in 2017 was the largest ever recorded: more than 8,700 square miles, roughly the size of New Jersey. This year, it’s expected to be smaller, but Skinner said it’s still a problem for fishermen.

“Forget about running home for a night or two because the expense is so much to go a great distance like that to catch shrimp,” he said. “The shrimp are becoming more and more offshore and deeper water where the water is more pure.”

That’s meant fewer shrimpers are able to survive, he said: About 30 years ago, there were about 100 shrimping families in Mobile Bay. Now there are fewer than 10, “and their means of living now is hardly anything worth trying to support a family on,” Skinner said.

The dead zones have been occurring at a time when it’s already tough to be a shrimper in the Gulf, Nacio said: The competition from imported shrimp from foreign countries is growing.

During their visit, Nacio and Skinner crisscrossed the Mississippi several times. Skinner said it’s a much different river up north, compared to the wide, muddy river down south.

The fishermen offer a perspective not often heard in Minnesota, said Bonnie Finnerty, a project manager with the Minnesota Pollution Control Agency.

“We’re at the head of the watershed,” Finnerty said. “We see immediate impacts of our environmental degradation, but we don’t fully understand day to day what happens downstream.”

Minnesota has nutrient reduction goals and is working to reduce the state’s impact downstream, Finnerty said. It’s one of 12 states that belong to a hypoxia task force founded in 1997.

Nacio and Skinner said they didn’t come to Minnesota to blame farmers. They see the visit as an exchange of ideas where both sides can learn from the other.

“We’re up here to support the farmers who are doing better practices with no-till farming, planting cover crops and doing things to help mitigate the runoff,” Nacio said. “Because if we can get these farmers all up here to do better, it’s going to improve the health of the Gulf.”