How do Albert Lea taxes compare? 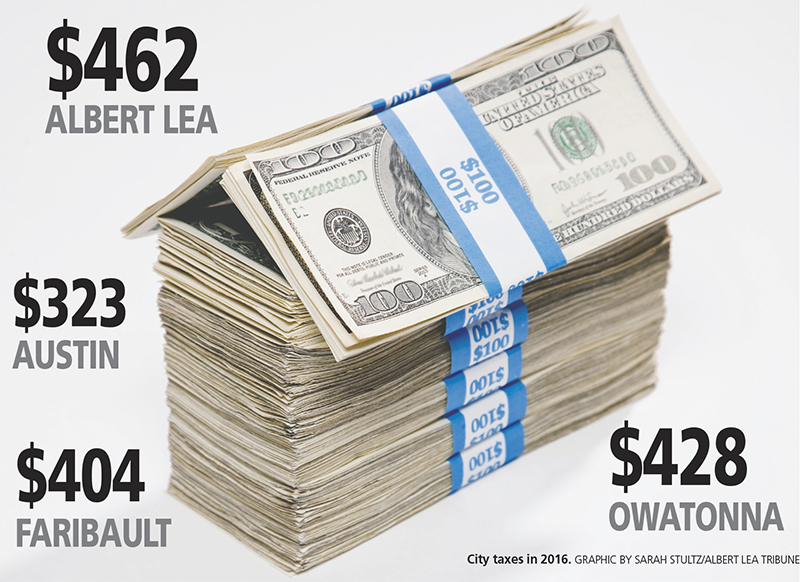 Albert Lea residents who own a $100,000 home face a higher city tax burden than residents of neighboring cities Austin, Faribault and Owatonna.

City Manager Chad Adams said the differences are due to Albert Lea’s median home price and services such as its full-time fire department.

“Austin’s still lower than us,” he said. “They don’t have as high of a tax levy as we do here, and they also get a lot more local government aid. They just historically have, based on the age of their housing stock and number of variables.”

Adams acknowledged the presence of a full-time fire department with 16 1/2 positions also affects the city’s tax burden but noted the community has expressed support for it.

“It’s shown to be a great value in our community,” he said. “And you look at all of the benefits of that, how they are able to respond to fires, other emergencies — that’s a higher value of service.

The city of Owatonna relies on four full-time firefighters, with the rest of their crew paid on-call employees.

Kuntz said he receives comments from residents advocating for tax increases to pay for infrastructure, while others say taxes should be lowered.

“When I get them on both sides, I can’t say they’re too far off from where they need to be,” he said.

Kuntz said the city has seen annual growth of 1 percent to 2 percent. That amount was steadier before the Great Recession but has stabilized within the last five years.

He said industrial growth in the city has helped ease the tax burden, noting three apartment buildings are being built.

He said the city has been cautious in raising taxes since the Great Recession because officials believe the housing market runs in 11-year cycles, and they do not want to have to raise taxes during a recession.

Voracek said the city is bringing in enough revenue to maintain its roads and bridges, and there are no anticipated shortfalls in its five-year capital improvement plan.

“We’ve got a really good tax system going here that’s meeting the needs of the community and not overtaxing,” he said. “And we’re providing some extra services in some areas that are driving up our tax rates a little bit more than in other communities.”

Adams said the city is trying to limit tax increases in its 2019 budget. He said the city has gone at least six years in a row without an operating tax levy increase, with increases coming only for capital projects such as street and infrastructure improvements.

“We’ve been very pleased with that,” he said.

“We’ve been seeing operating surpluses essentially every year in my tenure here — some larger, some smaller — but they’re all budget surpluses,” he said. “And we take some of that and manage it to try to keep down our operating levy, which we’ve been successful to do.

Adams said the city’s tax base does not rely on one company, meaning its tax base would not be severely impacted if one company closed.

“There’s so many different factors when it comes down to the tax variables on tax base as well, too,” he said. “Some communities have very large industries that take up a large chunk of the tax base, and they’re able to keep down the residential taxes because of that. We’re fortunate here, where we’ve got a lot of individual, strong companies, not just one or two.”

The city’s minimal tax levy increases have come from a balance of management and council philosophy, Adams said.

“If there’s some imminent, essential, critical needs, I need to be responsive to that and let the council know that we need to address those somehow,” he said. “But we’ve been able to address all those mutually through keeping the taxes down as well, too, until we see more tax base growth or population growth.”

Adams noted the city has taken controversial actions such as investing $4.6 million in its downtown district to increase activity, noting tax base growth on Broadway Avenue and surrounding areas has added about $1 million to the city’s tax base.

Adams said the city’s sales tax revenue has been at least stable, and the lodging tax has increased.

“That’s a great sign of more activity in just the tourism industry and just the strength of what the private industry has been willing to do and invest back in the community as well,” he said.

Adams acknowledged there will always be pressure to reduce taxes.

“I don’t know if there is anybody out there who is really advocating that taxes should be increased, just in general,” he said. “They want to know what they’re getting for the quality of those tax dollars and what kind of services are being provided.”