James “Jim” F. Rupp, 72, passed away peacefully at St. John’s Lutheran Community in Albert Lea. Visitation will begin at 3 p.m., and the memorial service for Jim will be at 4 p.m. Thursday at the St. John’s Lutheran Community chapel, 901 Luther Place in Albert Lea. The Rev. Don Malinsky will officiate. Please join the family at Harold’s Bar at 6 p.m. after the service Thursday to raise a toast to Jimmy. 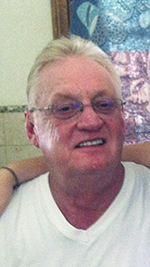 Jim was born April 14, 1946, to parents Harold and Beatrice (Marpe) Rupp in Albert Lea. He was raised on a dairy farm near Clarks Grove and later moved to Albert Lea. Jim became a father at a young age with his then-wife, Betty Hultman, and raised three beautiful daughters.

Jim worked at Queens for many years. He was a Trades & Labor board member and a local union officer for Queens. He also owned Your Best Shot pool hall in Albert Lea in the ’70s and played a key role in getting a D&R Star Pool League in Albert Lea. From 1983 to November 2014, Jim lived and worked in Las Vegas. He was employed as a pit manager at MGM Grand for many of those years.

Some of Jim’s favorite hobbies included watching Minnesota sports teams on TV, exercising his green thumb on plants and flowers, bowling and playing pool. Jim even played with famed pool legend Minnesota Fats. To friends and family, Jim was the life of the party. He especially enjoyed his role as grandfather and having an informal family reunion every year in Albert Lea during fair week. Jim loved animals dearly; he especially loved the dogs he shared his life with.