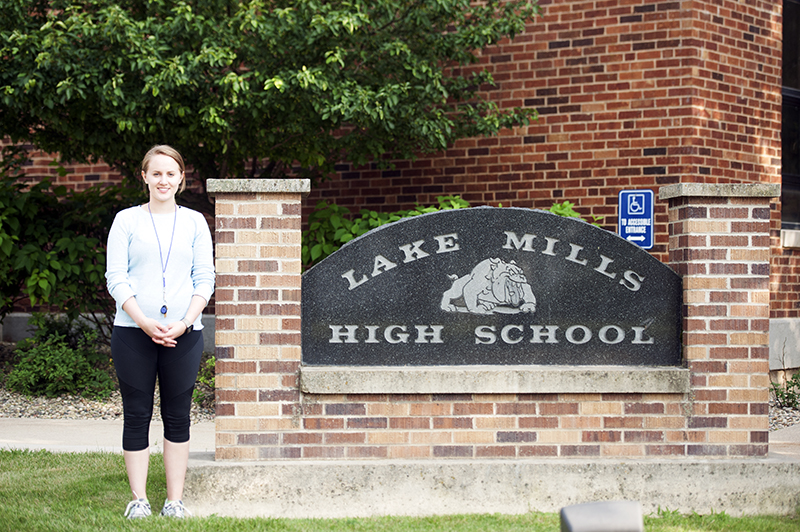 Whitney Spies takes over the Lake Mills cross country team in her first coaching position this fall. This is also her first year of teaching in the Lake Mills school district, after spending time at West Fork. - Tyler Julson/Albert Lea Tribune

In her first year of teaching at Lake Mills. Whitney Spies will also take on the role of head coach for the boys’ and girls’ cross country teams.

Spies, originally from Audubon, Iowa, attended college at the University of Northern Iowa where she attained her teaching degree in middle school special education and elementary. She got her coaching endorsement through Morningside College.

Her first two years of teaching were spent at West Fork, and although this will be her first coaching job, she does bring some experience having run cross country herself throughout junior high and high school.

She said she’s both excited and nervous for the season to get started.

“I’m excited because I love cross country,” Spies said. “I’m a little nervous because I’ve never actually coached it before, but I’m excited to get it rolling.”

The team started practicing together Wednesday and Spies said she has had a lot of fun getting to know the group.

“Everybody is very supportive of each other and that’s cool to see,” she said. “I think that’s a big part of what cross country is and to see that they already have that attitude is good.”

Spies described her coaching style as supportive and allowing of each of the runners to set their own goals. She said, especially in running, each athlete is going to have their own set of abilities, and being able to recognize what those are is going to be pivotal in the way she coaches.

Her biggest goal for the season is just to have everyone improve their times from the beginning to the end of the season.

Spies expects one of her biggest obstacles this year to be figuring out each runners’ limits and developing a plan for each of them individually with only having seen them run for a short time.

She also said the difference in courses is going to take some getting used to as first. Growing up and running in southwest Iowa, she said all the courses had vastly different layouts and she’s not quite sure what to expect from the courses in north central Iowa.

“I want everyone by the end of the season to enjoy it. In the end, I don’t want anyone saying ‘I’m  never running again.’ If they can start to like it along the way, that would be great.”