Marlene Parks Nash-Hartmann, 86, passed away peacefully Thursday, Aug. 9, 2018, at her home in Sun Lakes, Arizona, surrounded by her family. 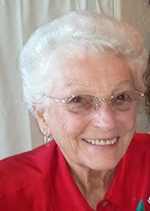 Marlene was affectionately adored by an abundance of family and friends.

Marlene grew up in Albert Lea, the first daughter of Lawrence and Eleanor Parks.

She was preceded in death by her sister, Mavis Parks (Hendrickson).

Her most loving childhood memories consisted of summers spent on the Kvenovld farm, hay rides, a delicious Minnesota tomato, dancing and quality time with her father.

Marlene moved to Florida with her family in 1970. She began a career as a J.C. Penny associate and retired after 25 years of service. She then relocated to Arizona in 1994 and married David Hartmann, who preceded her in death in 2007.

Marlene was always known by her infectious, beautiful smile and sense of humor. She was the master of one-liners. As the matriarch, she possessed a deep love for family. She was a confidant and an inspiration to all who knew her.  Marlene was a dedicated swimmer’s mom.  She had a strong passion for horses, golf and was an avid bowling champ. She was a die-hard fan of the Minnesota Vikings — wearing the braids proudly during the Super Bowl, although they were not in it. She also spent her younger years supporting the North Stars hockey team, often wearing “the beaver.” Marlene’s favorite indulgences included dancing to Frankie Valli and Frank Sinatra, “Girls’ Night” and enjoying the delicacy of breaded pork chops or a divine plate of spaghetti, and usually two scoops of ice cream before bed. Her family could never forget to mention her devotion to the perfect Bloody Mary and a cold Stella — formerly Heineken. She was very proud of her Norwegian and English heritage and spoke of it fondly.

There are no words to express the void she leaves behind, so many lives changed the day she left this world.

“Spread your wings and embrace God’s glory. We look forward to rejoicing with you soon,” her family said.

Funeral services will take place Oct. 5 at Freeborn Lutheran Church in Albert Lea. A time will be announced at a later date.