Mary Jean Nelson died Tuesday, Aug. 7, 2018, at Regina Senior Living in Hastings, where she had resided for the last 9 1/2 years. Prior to moving to Regina, she and her husband, Russell, had retired up north at Heidi Acres near Hillman, and she had been a longtime resident of Alden. 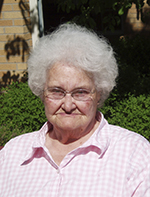 Mary Jean Mason was born Sept. 12, 1927, in Des Moines, Iowa, to John and Zeta Mason. Jean’s mother died when she was just a few months old, so she was raised by her maternal grandparents, Daddy Dick and Mother Jennie. She married Russell H. Nelson on June 28, 1952, and they lived in Alden; Ogden, Iowa; Phoenix and Tucson, Arizona; and Ramona, California, transferring across the country for Russ’ work with John Haddy. They returned to Alden in 1966, and Jean worked for the Svenningsens at Alden Bakery and Marvin and Marvel Niebuhr at Club 90. She was a simple woman who touched many lives with her kindness and warm personality. “Grandma Bulldog” — as she was affectionately known by her grandchildren — loved to play board games and Yahtzee with them.

Jean’s husband, Russell, preceded her in 2014, and her son, John Henry Nelson, passed in 2017. In addition to her father and mother, Jean was preceded by six siblings and their spouses, Alice and Mick Delmott, Helen and Jim McBeth, Sarah and Alfred Christensen, John and Phyliss Mason, Richard and Angie Mason and George and Norma Mason; and sisters-in-law and their spouses Elaine and Stub Ramsdell and Chinner and Paul Gilbert. The family misses them all.

A memorial service will be at 11 a.m. Saturday at Clasen-Jordan Mortuary. The Rev. Shari Mason will officiate. Interment will be at Alden Cemetery in Alden.

The family said they are forever grateful for the loving and respectful care she received at Regina and want to thank all the staff for making her Alzheimer’s journey so much easier.