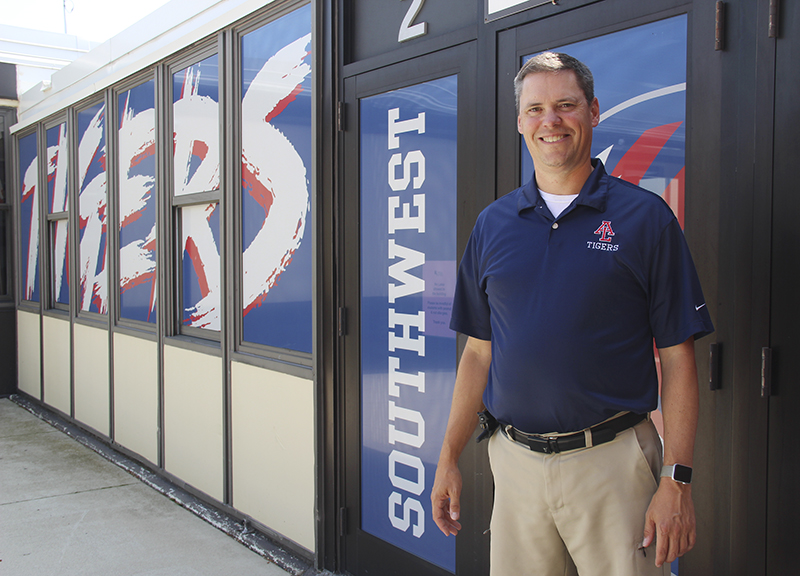 Chris Dibble is the new principal at Southwest Middle School. He has worked for Albert Lea Area Schools for two years prior to being selected for the position. Sarah Stultz/Albert Lea Tribune

The former dean of students at Albert Lea High School is starting in a new role this year — this time at Southwest Middle School.

Chris Dibble had worked for Albert Lea Area Schools for two years when the opportunity arose to apply for the principal position at Southwest Middle School after former Principal Steve Kovach left the district for a new opportunity in Hastings. Kovach had worked in the position since 2013.

Dibble said he already had his administration degree and was encouraged to apply by Albert Lea High School Principal Mark Grossklaus.

“Chris is a high-energy people-person with great organizational skills,” said Superintendent Mike Funk. “His experience as a dean at Albert Lea High School will serve him well in his new position, as he is familiar with our systems and how the district operates. We are looking forward to his leadership at the building level.”

Before coming to Albert Lea Area Schools, Dibble started his career in education as band director in Alden from 1997 to 2001 and worked in Faribault for 15 years — including 13 as band director and two years overseeing technology integration.

He said the experiences he has had leading up to this year will bring a different outlook to the position and help him as he begins his new role.

Dibble said his goals for the middle school are threefold: increase communication, build relationships with students and staff and put students first.

“We’re trying to make this a great place for students to learn,” he said.

Improving instruction is one of the goals across the district and will also be a goal at the middle school.

He said he wants to tap into the capabilities of teachers and work as a team to build the school.

Regarding technology, all students in both sixth and seventh grades will have Chromebooks, which is expanded from last year when seventh-graders were the only ones with the one-to-one technology.

Also new this year, the school is trying to start up its parent-teacher group again, which he hopes find success.

The school also hopes to grow the school’s signature fundraiser event, Tiger Trot, and get the community even more involved in that effort.

“We want to be a part of the community, not just a school in it,” Dibble said.

Helping Dibble at Southwest will be Assistant Principal Nicky Severtson.