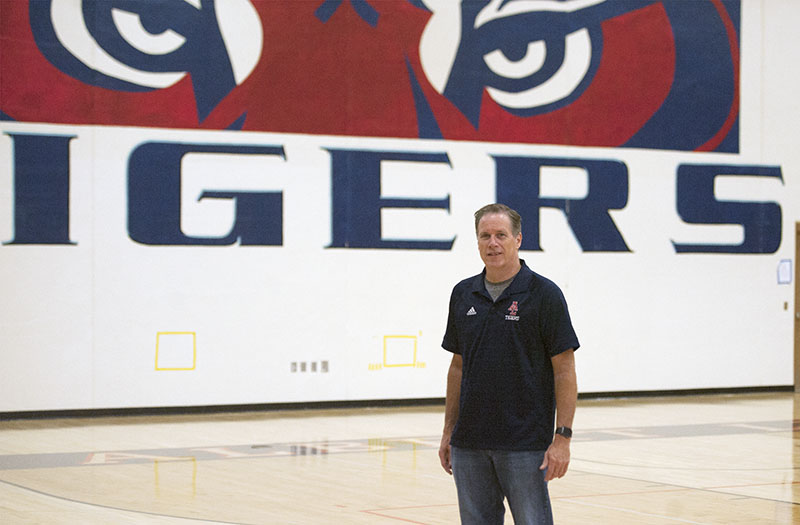 Jamie Cameron is taking over as head coach of the Albert Lea volleyball team this season. This will be Cameron's second run as the head coach, the first coming during the 2015 season. Tyler Julson/Albert Lea Tribune

After several years of coaching volleyball at many different levels, Jamie Cameron is taking his second run as the Albert Lea varsity head coach.

Cameron, originally from the Chicago area, currently resides in Clarks Grove, where he is the pastor at First Baptist Church of Clarks Grove. He has coached volleyball in Albert Lea for 11 years, with experience coaching eighth grade, b-squad, varsity and club teams.

“My style is a positive coaching style,” Cameron said. “Everyone is going to make mistakes, so we need to not dwell on those mistakes. It’s what you’re going to do with the next ball, and what your attitude is going to be when that comes.”

Although he will get wound up on the sideline every once in a while, he said he’s always keeping a positive mindset in looking for the things they can improve on the most.

Last year, the team finished the season with a 1-16 record, but Cameron is optimistic they will be able to improve upon that this year.

“Every team is going to go through their season of struggles, no matter what team you are,” he said. “It just happened to be last year for this team and we’re going to work through it together. It’s not a reflection of any coaches or anything like that. Sometimes, that’s just the season that you have to get through. Coming off a season like that, with the people that are left, it’s either going to be the attitude of, are we already defeated or are we going to be better, fight through this and change our mindset.”

Cameron was also an integral part of getting a club volleyball team started in Albert Lea. He said his daughter used to play for Albert Lea in high school and was participating in club volleyball all the way over in Rochester. He asked himself, “Why can’t we have something like that here?” and started and coached Albert Lea’s club team.

For a lot of first-time coaches, it can take time for the players to become used to a new system. However, Cameron’s involvement in so many other areas has allowed him to get to know a lot of his players already.

“I know a lot of these girls really well, just because I’ve been around the program for so long and been involved in so many areas,” Cameron said. “I don’t see there being any issues, but everybody approaches things in a different manner, and my coaching style compared to other coaches can be quite different.”

The Tigers will open their season with a match at home on Aug. 28 against Burnsville.