Raymond R. Delgado,Jr., better known as Dick Delgado, 82, of Hollandale passed away Tuesday, June 26, 2018, from a brain injury. He passed peacefully with family and friends at his side. A memorial mass followed by cemetery interment and reception will be at 11 a.m. Aug. 18 at St. Mary’s Catholic Church, north of Maple Island on County Road 30 at 84970 310th St. in Ellendale. 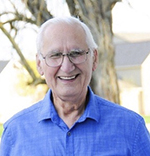 A lifelong resident of Hollandale, Dick was born March 27, 1936. He graduated from Albert Lea High School in 1954 and farmed potatoes and other vegetables with his father and brothers for over 35 years. Dick was a veteran of the Viking Division of the Minnesota National Guard, where he served on the parade drill team. In retirement he drove school bus for Crookston and Austin school districts and volunteered at school libraries. He was an Elks club, Eagles club and an American Legion member. He was active in numerous clubs and associations. Dick enjoyed motorcycling, gardening, traveling by RV, antique collecting and — most of all — dancing with Marlys Swenson and their numerous friends.

He is preceded in death by his parents Raymond Richard Sr. and Irene Delgado; and longtime partner, Carol Jean Cole, of Blue Earth.

Donations in lieu of flowers can be sent to the cardiovascular section of Abbott Northwestern Hospital at donate.allina.com/SSLPage.aspx?pid=349 or the charity of the donor’s choice.