Riverland welcomes students back for fall 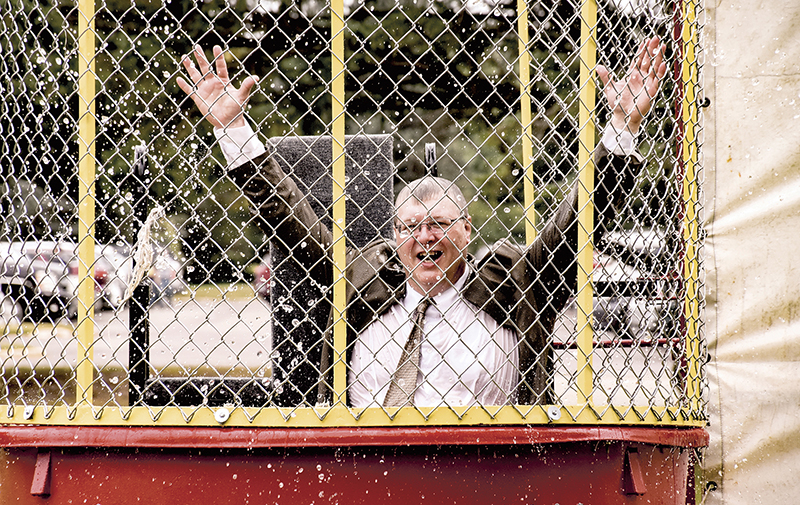 Kelly McCalla, Riverland Community College’s dean of academic affairs, pops up after being submerged in a dunk tank on the first day of the new school year Monday as a way of welcoming students back onto campus. - Hannah Yang/Albert Lea Tribune

With a satisfying pitch, Dean of Academic Affairs Kelly McCalla fell inside a dunk tank and was submerged inside a pool of water at the Riverland Community College campus. A few moments later, he resurfaced with a big grin as he climbed back up to the seat, dressed in full suit attire and all.

“It was cold, but not as cold as up north where I grew up,” McCalla joked. “I swam in Lake Superior, so this was nothing.”

Riverland students were welcomed back to campuses Monday,  the first day of the 2018-19 school year. All three of Riverland’s campuses in Austin, Albert Lea and Owatonna are hosting “River Days” to celebrate new beginnings as students made their way to classes.

Throughout the next several weeks, River Days will provide students an opportunity to participate in activities such as grabbing breakfast with advisers and alumni, grill outs, attending an activity fair and more.

“It’s fun to see students having fun on the first day,” McCalla said. “College should be fun.”

River Days also helps increase engagement between staff and students as they begin the academic year. The aim: to acclimate students in activities for a better college experience through a welcoming atmosphere, as well as getting to know faculty members and advisers as a way of having a smoother transition into campus life. 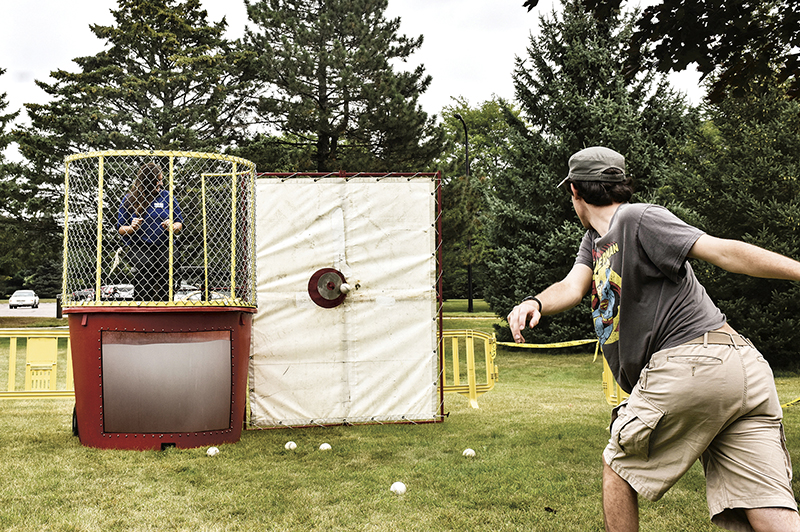 A Riverland Community College student throws a perfect pitch to dunk Dean of Students Chelsea Anderson during River Days as a way of welcoming students back to campus on Monday for the new school year. – Hannah Yang/Albert Lea Tribune

“We’re trying to get our advisers to get out and get engaged with our students,” said Amanda Matthews, director of advising services at Riverland. “We have more than 3,000 students, which was up from what we had last year. We’re going to be up.”

Enrollment for the new school year has increased by about 3.98 percent from the previous year, according to Chelsea Anderson, dean of students. With a preliminary look at enrollment, the numbers were indicating a positive growth as staff continues to engage and make connections with students from the beginning.

“Classes started and students are running to class,” Anderson said. “With these festivities, our staff were excited to help students have success from day one.”

Riverland Community College has many goals to meet for the upcoming year. Among the biggest would be the preparations that faculty and administrators are making in light of the new Assurance Scholarship Program that was announced earlier this summer, which would assist prospective students from Austin High School and Pacelli High School attend Riverland debt-free. The program won’t be implemented until fall 2019, and the logistics are still being worked on.

Renzo Rodriguez, 20, a second-year accounting student at Riverland, transferred to Austin from Miami  this fall for the baseball program. For him, entering onto campus in a new place became more positive after seeing staff members taking the plunge inside the dunk tank.

Rodriguez took aim at the target and, with precision, sank McCalla inside the dunk tank.

“I think it’s pretty cool,” he said with a grin. “It keeps students entertained.”