Memorial services for Robert “Jack” Westendorf will be at 4:30 p.m. Sept. 8 at Bonnerup Funeral Service in Albert Lea. Visitation will be one hour prior to the service. Interment will be in Hillcrest Cemetery at a later date. 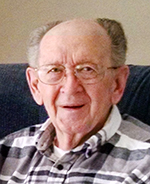 Jack was born Oct. 29, 1931, to his mother, Anna Westendorf, in Iowa City, Iowa. He grew up in northern Iowa and attended grade school in Lake Mills. Jack graduated from Emmons High School.

Following graduation, Jack served in the U.S. Army while stationed in Germany during the Korean Conflict. He moved back to Albert Lea in 1955.

He married Catherine McMullen and they later divorced. Together they raised four children. He was a gentle and caring father. According to his children, “He was our hero.”

For 20 years he was a salesman for Plymouth Shoe Store and then went on to work for Wilson’s Plumbing Supply Co. for another 20 years. In his retirement he worked and volunteered at the American Legion, of which he was a member for 50 years. His hobbies included completing crossword puzzles, such as the New York Times, in pen. Jack was an avid bowler and had a near perfect game, joining the “11 in a row” club. He golfed with a group of men at Green Lea Golf Course five days a week during retirement. At age 81, Jack was rebaptized through Sojourner’s Church.

He was preceded in death by his mother, Anna Westendorf Lien; stepbrother, Gary Lien; his beloved dog, Missy; and many close aunts and uncles.

In lieu of flowers, memorials are preferred to Prairie Senior Cottages, the American Legion or to the donor’s choice.