Roland J. “Rollie” Kelzenberg, 92, was born Nov. 11, 1925, in Verndale, the son of William and Pearl Kelzenberg. He attended and graduated from Verndale High School in 1943. Roland served in the U.S. Merchant Marines in World War II from January 1944 to October 1946. He served as an engineer, first on a ship that carried troops and supplies to Omaha Beach during the invasion of Normandy. From there he served on ships hauling aircraft fuel to Air Force installations in the Mideast and Pacific Theaters of operations. He was very proud of his service to his country. 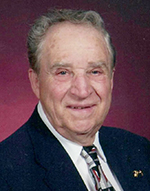 Roland married Erliss Paulson on Aug. 26, 1947. Roland was a creamery manager in Rockford, Iowa, for a time and then in Lake Park. He and Erliss later farmed in the Clarks Grove area and then in the Oakland area. After farming, he worked as a maintenance engineer at Naeve Hospital in Albert Lea.

He and Erliss opened their home to several foster children over the years on the farm and truly enjoyed the children. He was a 4-H club leader, served on the board of the Farm Bureau and was a local chairperson for the Republican Party in the area. In 1972 they moved to Owatonna when he was hired by the Minnesota Department of Transportation as a building maintenance supervisor until his retirement in 1988.

Roland loved to hunt, fish, play cards and enjoyed golfing with friends. He looked forward to the times he could play golf with his grandson, Brian.

Roland was always willing to help anyone in need and was very active volunteering as an American Red Cross bloodmobile worker and blood donor. He volunteered at Healthy Seniors, Steele County Food Shelf and Senior Place, where he served on the memorial committee for several years. He loved carpentry, including his work remodeling several cabins they owned over the years. Roland loved to do crafts, which he shared with family and friends. He also served on the board of Ivanhoe for several years and was a member of Sacred Heart Church. His last two years he lived at Rose House in Branson. His church and family were a very important part of his life. Roland wanted to be remembered as believing that a man’s worth not be judged by what he accomplished for himself, but what he had done for his fellow man.

He is preceded in death by his parents; his wife, Erliss Kelzenberg; and five brothers and sisters.

A memorial service for Rollie will be at 2:30 p.m. Tuesday at Our Lady of the Lake Catholic Church in Branson, Missouri. Inurnment with full military honors will take place at 10 a.m. Friday in St. John Cemetery in Owatonna. In lieu of flowers, memorial contributions may be made to Branson Veterans Task Force, Woodland Hills Family Church or Our Lady of the Lake Catholic Church. Arrangements and cremation are under the direction of Cremations of the Ozarks. To leave an online condolence, visit www.cremationsoftheozarks.com.