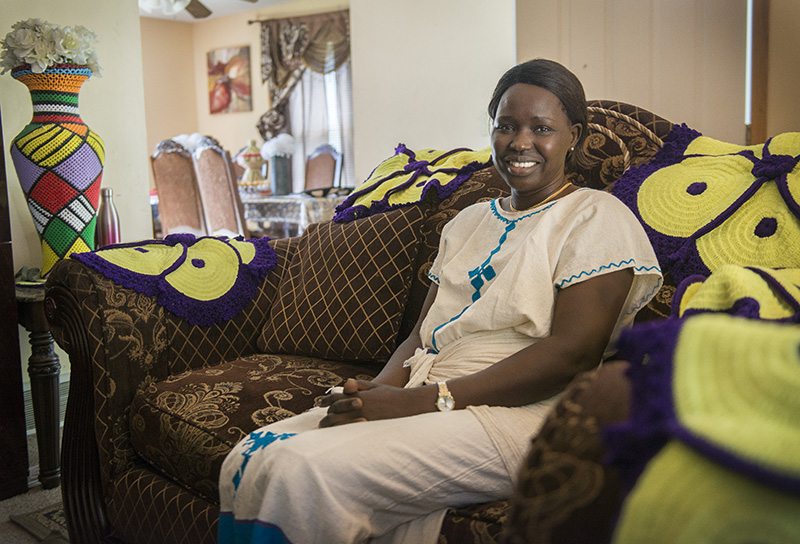 Mary Puok, originally from South Sudan, fled to an Ethiopian refugee camp and then to Kenya before coming to the United States. She tries to go back to Ethiopia once a year to visit her mother and other family members who are still there. Colleen Harrison/Albert Lea Tribune

CNA able to bring more supplies to family in Ethiopia

Thanks to additions from fellow staff members at St. John’s Lutheran Community, one certified nursing assistant had to pack up a bigger suitcase for her trip to Ethiopia.

Mary Puok returned Aug. 17 from a six-week visit to her mother in Ethiopia, as well as some of her late husband’s family. As she was preparing for the trip, St. John’s materials manager Wanda Wangsness was stocking a supply closet and overheard her talking about the flight.

When Puok returns to Ethiopia, she takes with her over-the-counter medicines and first-aid supplies for her family and others in her mother’s city, Gambella. Puok said people will come to her mother’s home in the evening for the medicines she brings. Her reputation precedes her from previous visits.

“Every year I go, I have something, and then they know,” she said.

When Wanda Wangsness heard Puok say she takes supplies home for her family and a few to share around, she asked to help. The No. 1 requested supply is antacid, Puok said.

“I don’t know if it’s the spicy food or what it is,” she said laughing. 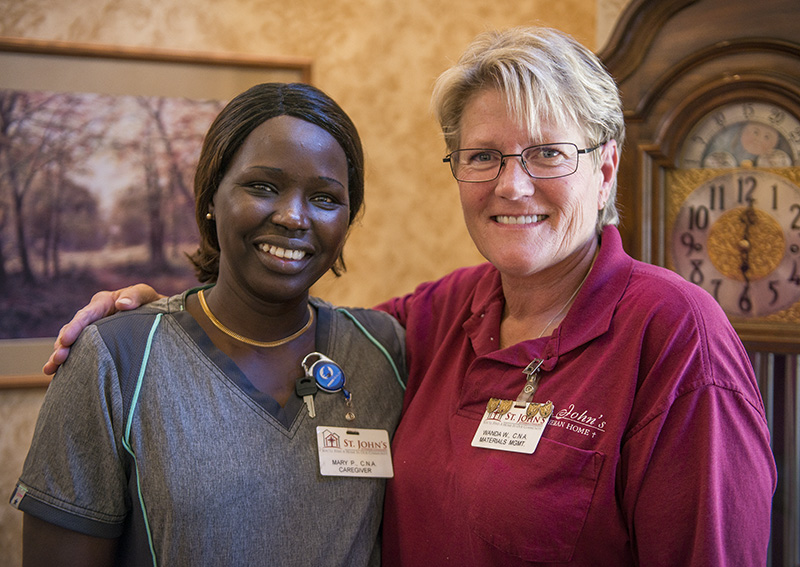 Wangsness’ mother lived at St. John’s, and Puok was one of her mother’s caregivers.

“She just went the extra mile all the time,” Wangsness said. Wangsness’ mother had Alzheimer’s, and she said not everyone has the gentleness required to ensure Alzheimer’s patients have quality of life. Puok and the other caregivers treated her mother with respect, Wangsness said, and dignity.

Helping supply the medicines and first aid materials was a way of reciprocating that care, she said — generosity and camaraderie goes both ways in a close staff.

“There’s so many things on there that if I had a little help with money, we maybe could buy everything on there,” Wangsness said. She reached out to other co-workers, who chipped in. 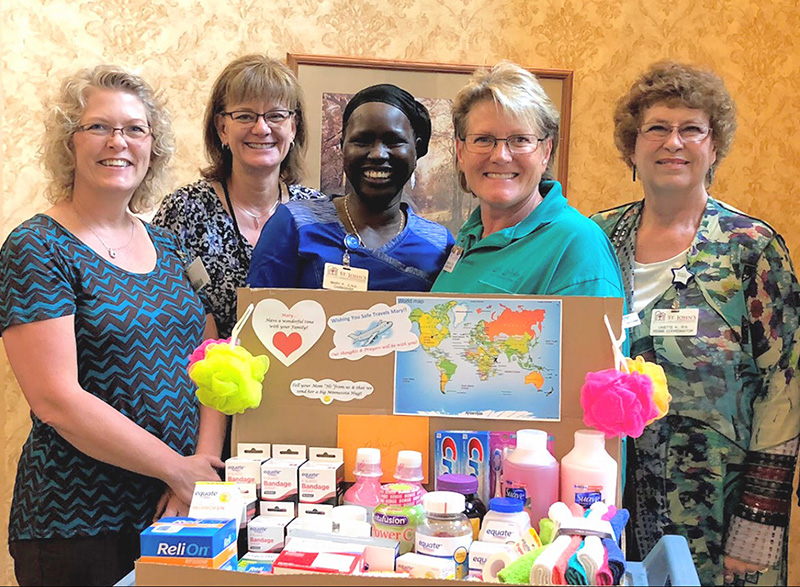 Sara Obermeyer, left, Deb Eisenmenger, Wanda Wangsness and Linette Kleinschrodt present Mary Puok, center, with supplies collected to give to her family and other community members in Ethiopia. Provided

Puok said she takes these items with her because medicine is expensive and access to health care in the area where her mother lives is limited.

“(Those medicines, it looks like a lot,” Puok said, gesturing to a picture of the supplies she packed up and took to Ethiopia, “ … but when I went there, it was nothing.”

Also on the list of spendy items is milk, Puok said. That’s why, when she was in Ethiopia in July and August, she purchased her mother a cow at an auction to satisfy her mother’s penchant for dairy. It also gives her mother a chance to boost her own income by selling milk to others.

Puok grew up in South Sudan, but due to war and violence, moved to a refugee camp in Ethiopia in 1985. In 1993, she moved to a different one in Kenya with her husband and children.

“You’ve got to run away to where your family will be safe,” she said.

But life in Kenya was still difficult, she said. Puok said the paperwork process for her family to come to the United States as refugees took over two years. She and her family moved to Des Moines, then to Albert Lea in 2002. Her husband, Simon Ter Dup, was a pastor in Albert Lea before his death in 2014.

Puok has worked for St. John’s at Luther Place since 2005.

“I really love my job because … I love to help other people, like, you know, like they help me. I feel like this way (they’re) my family, you know, because when I’m not home, I feel lonely. Because since my husband died — I’m telling you the truth — I don’t like my house sometimes when my kid is not home. When I come to St. John’s, it’s a big change because I see more people.”

She said the staff at St. John’s were there for her during her husband’s illness and when she had a child prematurely.

“I feel like this place is my family,” Puok said.

Puok said she tries to return to Ethiopia every year, but her ability to do so depends on time and money.

“I still have to help more people,” she said.