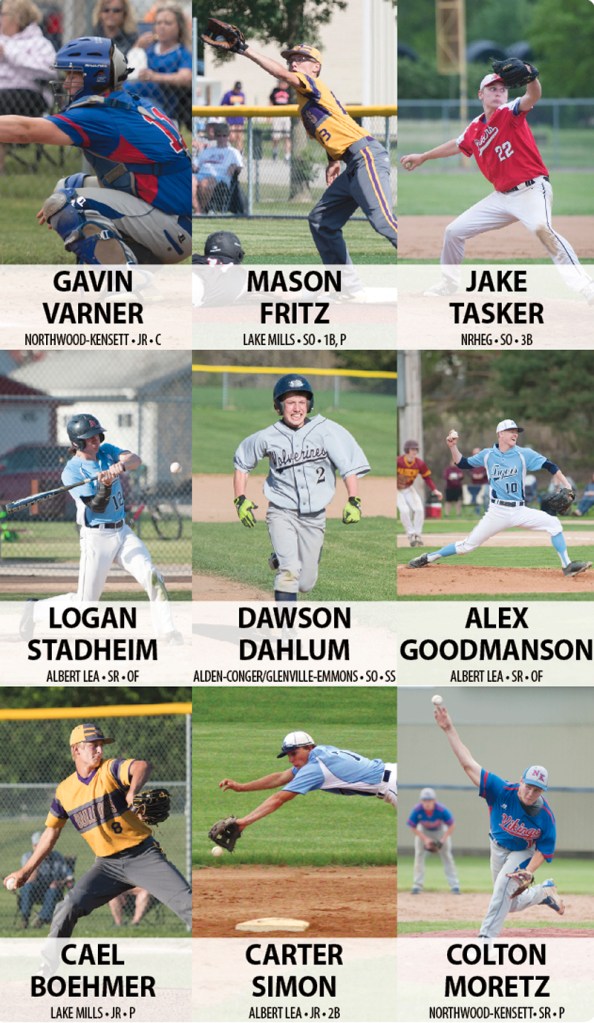 Boehmer was not only a leader for his team on the mound this season, he was also a major part of the Bulldogs’ success at the plate. He led the area in many categories, including recording 32 hits, scoring 25 times and walking 22 times. He also had an impressive batting average of .451, good for second in the area.

On the mound, Boehmer finished the season with an ERA of 2.63 through 34 2/3 innings of work. He also struck out an area-leading 60 batters, picking up four wins.

Boehmer was an integral part of Lake Mills’ success this summer and as only a junior, will undoubtedly be back for more in his senior season.

Dahlum was a bright spot for the Wolverines in just his sophomore season. Dahlum led the area with a .457 batting average. He also had 21 hits and brought in nine runs, while only striking out three times throughout the season.

He had seven multi-hit games throughout the 14-game season and ended the year on an eight-game hitting streak.

According to head coach Lucas Knutson, Dahlum was a force at shortstop as well, making tremendous plays all year. Knutson said he could have been used at pitcher as well, but his play making ability at shortstop was too valuable.

The Wolverines will surely be on the upslope next season behind the leadership of Dahlum.

Varner had a big year for the Vikings as the team had one of their best seasons in over a decade. Varner boasted a .375 batting average and had an area-leading 22 RBIs, while scoring 20 runs himself and recording 24 hits.

Of those 24 hits, seven were doubles and two were home runs.

Simon was a defensive specialist at second base for the Tigers this season. He also led the team in batting average with a .350.

Although Albert Lea finished the season with a 6-12 record, Simon was a bright spot at both the plate and in the field. He was named to the All-Big Nine Conference honorable mention team as well as being selected as the Tigers’ Offensive Player of the Year.

Goodmanson was right behind his teammate Simon in batting average with a .342 for the season. He hit two doubles and had four stolen bases. Even as one of the best center fielders in the conference, Goodmanson also pitched for the Tigers, acquiring a 2-0 record in 18 1/3 innings pitched.

Moretz was another pitcher who dominated not only on the mound, but at the plate as well. He pitched 32 innings, allowing just 28 hits against 122 batters faced. He recorded 52 strikeouts, while walking just 13.

At the plate, Moretz generated many runs for the Vikings, scoring 16 himself and hitting in another 14. His season batting average was .329, and he hit five doubles, one home run and stole 13 bases.

Fritz is one of three sophomores to make the first team. His pitching performance throughout the season put him above the rest of the area in many different categories. Fritz pitched the most innings of any pitcher in the area with 37, which makes it even more impressive that his ERA was also the lowest in the area at 1.14.

Fritz had a big year at the plate, as well, with a .290 batting average, scoring 14 runs, batting in another 10 and recording a total of 20 hits.

Stadheim was another piece to the talented outfield for the Tigers this season. He notched three doubles on the year and scored seven runs with a batting average of .289. Described by head coach Sean Gaston as a tremendous leader, Stadheim was awarded the team’s Tiger Award, which is awarded to the player who reflects the values of a great baseball player. He also had an on-base percentage of .378 and a slugging percentage of .368.

Tasker led the Panthers in nearly every offensive category. He posted a season batting average of .324, had nine RBI’s, nine runs and walked 18 times. Tasker also only had three strikeouts all year, the least in the area among qualified hitters.

Tufte finished the season with 11 hits, scoring five runs and hitting in another seven. His season batting average finished at .314.

On the mound, Irons threw 11 strikeouts and allowed five walks. At the plate, he recorded 16 runs on 16 hits while also hitting 15 RBIs.

Staloch finished with an average of .200 at the plate. He scored five runs and had four RBIs.

Zebro finished the season with a batting average of .245.

Thisius had a season batting average of .250.