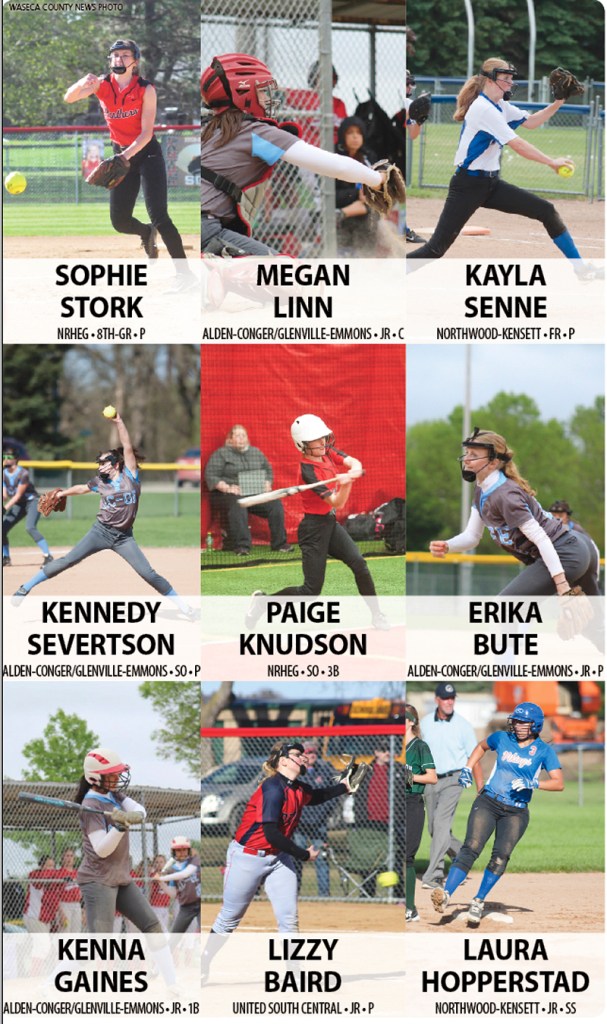 Megan Linn finished the season leading the area in both batting average (.424) and walks (13). She also used 14 hits to bring in seven runs and scored 10 runs herself for the Wolverines. Although Alden-Conger/Glenville-Emmons was only able to win two games this year, the experience Linn, along with other returning talents, bring to the team next season will play to a big advantage.

Kenna Gaines was right behind her teammate Linn in terms of batting average, finishing the season at .415. Her run production at the plate was also stellar this year, recording 15 RBIs, 17 hits and scoring eight runs herself. Gaines will be another one of the returning upperclassmen for the Wolverines next season.

Erika Bute was a utility player for the Wolverines in 2018, playing many spots in the infield — including third base, shortstop and pitcher. Her athletic play in the field was matched by her performance at the plate. Bute finished the season with 18 hits, recording 18 runs and hitting in four. Her final average was .367.

Kennedy Severtson, like Bute, played many positions for Alden-Conger/Glenville-Emmons in the infield. She boasted a run total of 24, which was tied for the lead throughout the area. Severtson also had 12 RBIs on 16 hits and drew nine walks. Her final batting average was .302, making her one of the six Wolverines to bat over .300.

Laura Hopperstad, as a junior, was a leader both offensively and defensively for the Vikings in 2018. She finished the season near the top of the area in almost all offensive stat categories. Her batting average of .410 was good enough for third in the area, she was second in total hits by one with a total of 32 and her 24 runs were tied for first. Hopperstad will be a key part of Northwood-Kensett’s improvement next season.

As only a freshman, Kayla Senne was not only one of the top pitchers in the area in 2018, she also had an elite year at the plate. On the mound, Senne was far ahead of the rest of the area in strikeouts with 142 throughout the season. At the plate, she was fifth in the area in batting average (.388) and led the area with 33 hits. Senne also recorded 16 RBIs, 21 runs and stole 13 bases.

Paige Knudson put up consistent numbers across the board in the offensive categories. Finishing with a .318 batting average, Knudson hit 18 RBIs on 18 hits and scored 19 runs of her own. After a 11-9 finish and a playoff run to end the season, the loaded roster of young players for the Panthers will likely make them a contender in the years to come.

As an eighth-grader and the youngest player to make the first team, Stork led the Panthers as their premier pitcher throughout the season. She won 11 games this season, recording 97 strikeouts with an impressive area-leading 1.139 ERA. Offensively, Stork had 19 hits — hitting in eight runs and notching 12 runs herself. Her final batting average for the season was .292.

Lizzy Baird was a bright spot on a United South Central team that struggled in the 2018 season, finishing 1-12. Baird finished fourth in the area in terms of batting average, hitting .389 on the season. She also recorded 10 runs on 14 hits. Six of those hits were doubles and one was a home run.

Grace Erickson finished the season with a .353 batting average, while recording eight runs on 12 hits and hitting in another eight RBIs.

Trinity Newman had 15 hits and 17 runs through the 2018 season. She also hit seven RBIs and struck out just six times.

Hitting .340 through the season, Ava Kyllo led the Panthers in batting average in 2018. Kyllo also scored 12 runs on 18 hits.

Cloie Arndt finished the season with a batting average of .333, while hitting in 12 RBIs and scoring 18 runs on 18 hits.

As just a seventh-grader, Schultz recorded a .319 batting average throughout the year. She also had an impressive 22 hits and scored 22 runs.

Coaches from Lake Mills and Albert Lea declined to make any nominations for the All-Area team.