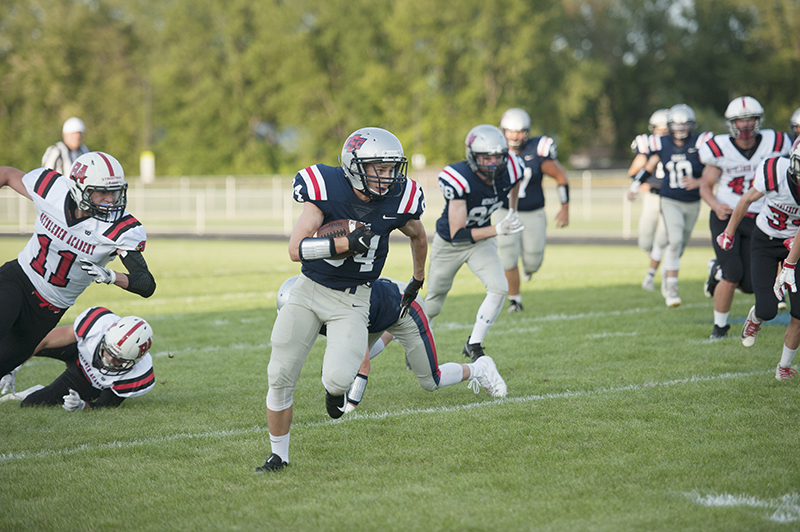 Despite a shaky first quarter, failing to punch into the endzone when inside the 15-yard line, the Rebels found their stride in the second quarter and beat the Cardinals 35-0.

United South Central started the game with a bang, moving the ball down the field inside the 10-yard line in under three minutes. However, the team was unable to find the endzone and turned the ball over after failing to convert on fourth down. 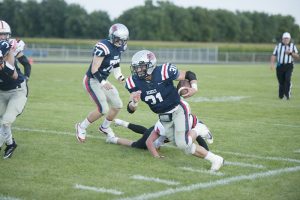 Defensively, the Rebels played soundly all night, forcing a Cardinal three and out on their first drive on the field. It seemed as though the Rebels were going to put their first points on the board on the next drive, but a long touchdown run was called back by a holding call and eventually led to a Rebel punt.

United South Central took the ball back to start the second quarter and never looked back.

Three minutes into the quarter, senior Colby Klocek caught a 14-yard pass from junior Isaac Meyer to give the Rebels their first lead of the game. The PAT was faked and converted on a pass from A.J. Kloos to Klocek.

On their next offensive drive, the Rebels would again find pay dirt. This time it was senior Derek Christensen who got into the endzone on a 10-yard rush. After an unsuccessful PAT, the Rebels were leading the Cardinals 14-0.

United South Central got the ball back one more time in the first half after another strong showing by the defense. 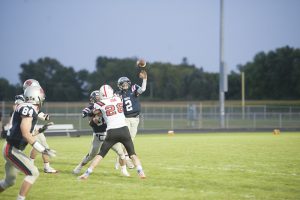 United South Central junior Isaac Meyer throws a pass Friday night against Bethlehem Academy. Meyer was 8 for 13 with 86 yards and a touchdown in the win. – Tyler Julson/Albert Lea Tribune

The Rebels marched right down the field to get another score before the halftime break. A 7-yard run from junior Zach Niebuhr and a successful PAT attempt, put the Rebels up 21-0 with just 31 seconds remaining in the half.

United South Central came out riding a wave of momentum in the second half. Yet another three and out for the defense, put the Rebels in excellent field position. They would capitalize on that position a few plays later as Meyer scored on an 8-yard run to take a 28-0 lead.

Niebuhr found the endzone for a second time on the next drive with an explosive 17-yard run.

The Rebels were in coast mode through the final quarter of play as the clock was continuous throughout.

The Rebels start the season at 1-0 and will play again on Friday when they play Mayer Lutheran on the road.