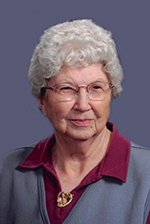 Velma “Arlene” (Church) was born Dec. 11, 1929, in Polk County, Nebraska, to Herman and Florence (Branting) Church. The family moved around and Arlene graduated from high school in Denver. On Oct. 3, 1951, Arlene was united in marriage to Jesse Myron Cole in Denver. The couple was blessed to welcome a son, Garrett. The couple lived there for 12 years before moving to Albert Lea — a place she called home since 1964. Arlene started her career working for the University of Colorado as a bookkeeper. When she moved to Minnesota, she worked seven years at AMCO in Mankato in the accounts receivable department. In Albert Lea, she worked as a bookkeeper for Montgomery Ward for nine years.

Arlene also enjoyed working at the bait shop their family owned across the street from Ascension Lutheran Church.

When Arlene wasn’t working, she enjoyed going downhill skiing with her husband. Arlene was known for her beautiful artwork. She often had displays of her drawings and paintings at Art in the Park, as well as the Lloyd Herf Show. She would put a lot of her art in the fair, where she won many ribbons in her years. She was also known for baking her delicious chocolate brownie drop cookies. Her grandkids loved her baking.

Surviving family members include her son, Garrett Cole, of Albert Lea; granddaughter, Heather (Scott) Johnson, of Onalaska, Wisconsin, and their children Emily and Benjamin; grandson, Cody (Cassandra Laite) Bennett, of Albert Lea and his children Avah, Honey and Alexis; as well as many loving extended family and friends.