What a glorious day of celebration! On Wednesday, Aug. 1, 2018, a mother, grandmother, great-grandmother, family member and friend was called to her heavenly home to be with her Lord. At the time of her calling, Vida Fuller was residing at Gertrude Senior Home in Shakopee. She was born Nov. 26, 1916, in New Richland. 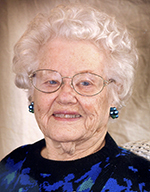 Vida lived a full, joyful life for 101 years and 9 months on God’s beautiful earth. She will live on in the hearts of her family, neighbors and her many friends.

Vida was born to Carl and Ida Halvorson and grew up on the family farm in Waseca County. She also attended a country school. She always said how much she enjoyed tilling the land and watching the family crops grow and then, of course, the harvest. Vida said she lived in the best of times. As a young girl she tilled the land using a team of her family’s horses — both two-hitch and four-hitch — and watched a man land on the moon. Vida thoroughly enjoyed gardening, canning produce she had grown, crafting of all kinds and hunting and fishing with her sons and husband. In addition, she volunteered in her community in Walker.

In 1937, Vida married Lester E. Fuller, who lived in Clarks Grove. This is where their two sons, Lyle and Larry, were born. After many years of Lester’s employment as a machinist in and around Albert Lea, Lester moved his family to Minneapolis and then on to Walker, where Lester and Vida retired. Lester preceded Vida in death on Oct. 17, 1995.

“Mother’s laughter, smile, generosity and her sense of humor will be greatly missed by all those who touched her long and loving life. Mother was a spiritual being, having read her Bible twice. She also read 111 books in her later years. Mom was not known to like reading, but she kept track of every title and catalogued them, for her record and satisfaction. She prayed for her family and friends daily. In her new heavenly home we are sure she will be tending to God’s garden,” her family said. “Our family wishes to thank everyone who cared for and visited with Mother and watched over her in her later years. A special thanks to grandson, Kurt Fuller, as he attended to his grandmother as a medical liaison between her residences and a special thanks to her many doctors and caretakers at May Creek and St. Gertrude’s.”

A funeral service for Vida Fuller will be at 11 a.m. Tuesday at Bonnerup Funeral Service in Albert Lea. A visitation will take place half an hour prior to the service. The Rev.  Clayton Balsley will officiate. Interment will be in Geneva Cemetery.

Memorials are suggested to Community Church-Walker United Church of Christ.