Funeral services for Vivian I. (Troe) Toenges will be at 10 a.m. Thursday at First Lutheran Church in Albert Lea. The Revs. John Holt and Kent Otterman will officiate. Interment will be in Shady Oaks Cemetery. Visitation will be from 4:30 to 6:30 p.m. Wednesday at Bonnerup Funeral Service and one hour before the service at the church. 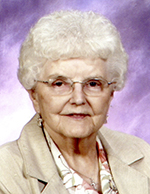 She was born Jan. 19, 1927, in Silver Lake Township, Iowa, the daughter of Helmer T. and Myrtle L. (Hanson) Troe. She attended School District No. 2 until eighth grade, completed ninth grade in Emmons and then graduated from Albert Lea High School.

Vivian began her working career in sales at Wilson & Co., then worked for American Gas, Diet Center and as a dietary aide at St. John’s Lutheran Community for 15 years, before retiring in 2001.

She was a member of First Lutheran Church, where she taught Sunday school and was president of Circle No. 31 for 15 years. In earlier years, she enjoyed being a 4-H leader. She also served as the treasurer for Shady Oaks Cemetery for many years.

Vivian’s life was centered on faith and family.

Memorials are suggested to First Lutheran Peace and Power.