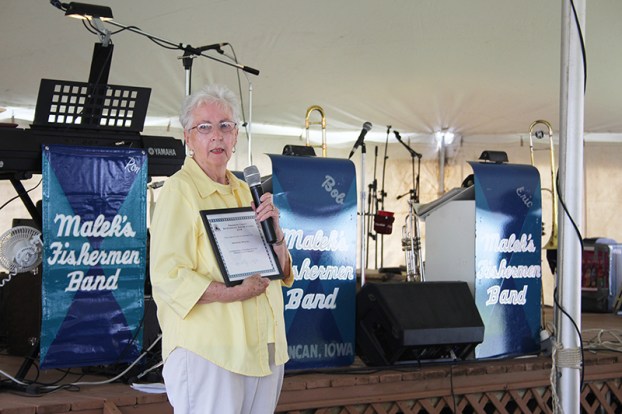 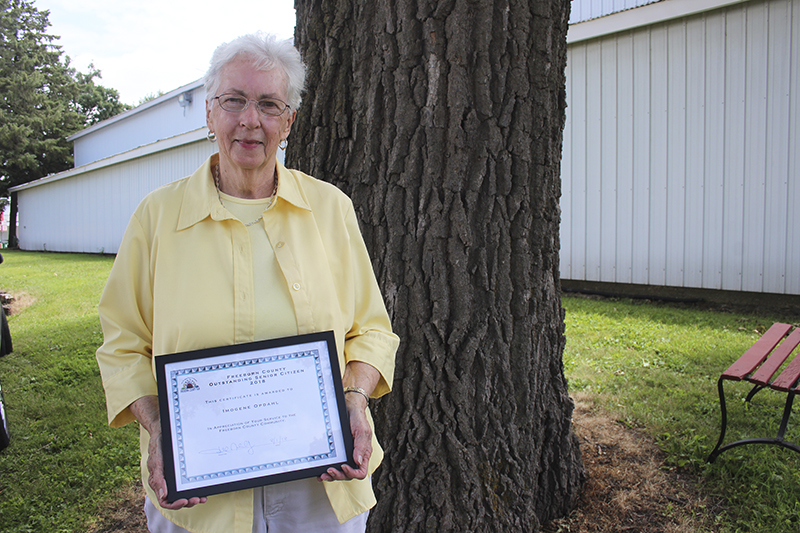 Among other involvements, Opdahl has volunteered for blood drives, supervised the fair’s 4-H non-livestock building, serves on Emmons Lutheran Church’s parish council, volunteers at the Emmons library, is past mayor of Emmons and leads a Freeborn County Crisis Response team.

“Jeanie, you are an inspiration to all of us and you set an example of how you give back to the community,” Petersen said.

For Opdahl, her reason was simple.

“I love volunteering,” she said during the ceremony. 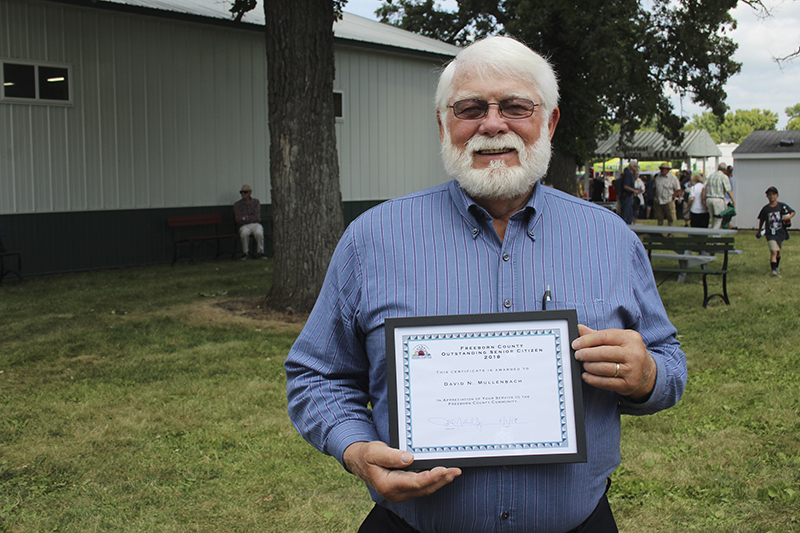 Dave Mullenbach’s award as Outstanding Male Senior Citizen is one of a line tracing back to 2000, recited by presenter Jean Eaton during the ceremony. “His record speaks for itself,” she said. – Sarah kocher/Albert Lea Tribune

“If there’s a need in Albert Lea, Dave is there,” Eaton said. 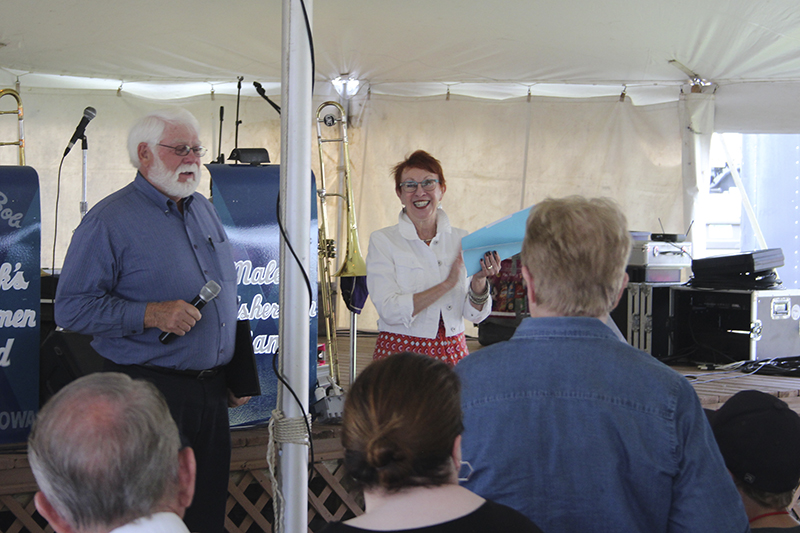 Dave Mullenbach asks his wife to stand up and thanks her during his speech after being announced as the Outstanding Male Senior Citizen Wednesday. – Sarah Kocher/Albert Lea Tribune

Mullenbach is a veteran and former Albert Lea American Legion Post 56 commander, past president of Daybreakers Kiwanis, volunteered for the Albert Lea Township Fire Department, does maintenance at Freeborn County Historical Museum; is president of the wrestling, volleyball, softball and baseball associations; serves on St. Theodore Catholic Church’s financial council and volunteers with Shinefest, in addition to further commitments in the community.

“I tell all you people, when somebody calls and asks for help, if you only do it one time to volunteer, do that,” Mullenbach said. “It’s worth all the money in the world to do that, because, well —”

“— you’ll get addicted,” Eaton finished for him. 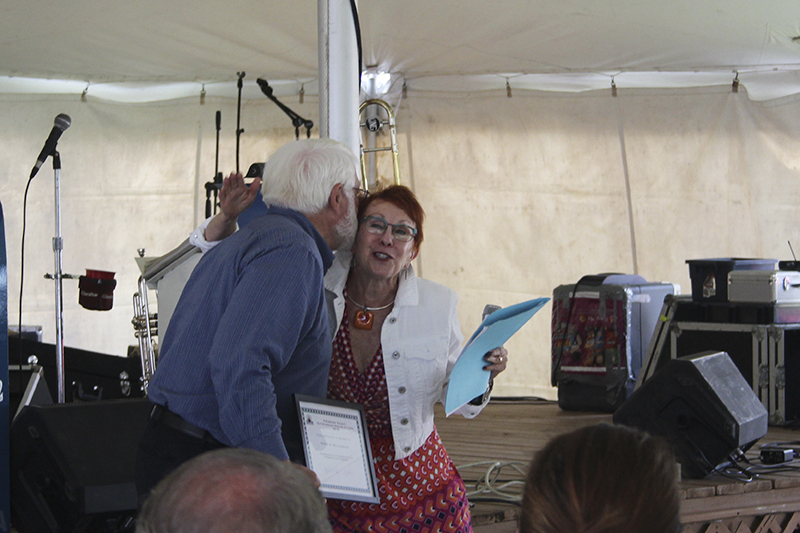 Dave Mullenbach’s award as Outstanding Male Senior Citizen is one of a line tracing back to 2000, recited by presenter Jean Eaton during the ceremony. “His record speaks for itself,” she said. – Sarah kocher/Albert Lea Tribune

Eaton said the pair will go on to the Minnesota State Fair as outstanding representatives of Freeborn County.

“Dave and Jeanie are such role models,” Eaton said. “We hope they encourage you to give back to your community …. Whatever your interest or passion is, give back.” 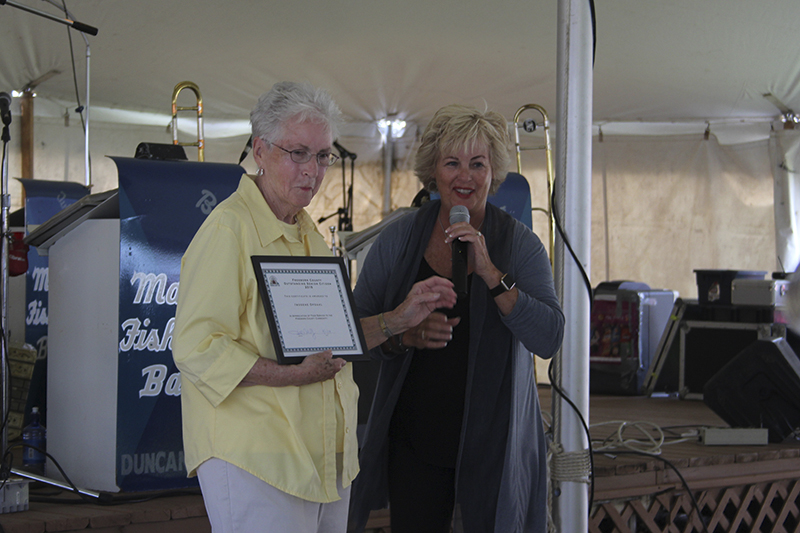 Susie Petersen hands off the microphone to Imogene Updahl to say a few words after being named the Outstanding Female Senior Citizen of the Year. – Sarah Kocher/Albert Lea Tribune