Washington man charged in high-speed chase on I-90 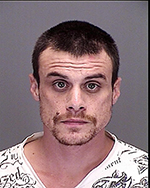 Donovan Reese Anderson, 34, of Gold Bar, Washington, is charged with felony fleeing a peace officer in a motor vehicle and misdemeanor driving while intoxicated.

Court documents state Anderson was charged after a Faribault County deputy was dispatched to Interstate 90 near the Bricelyn exit on a report of a domestic assault in a Ford Focus traveling west.

The chase continued into Martin County, and stop sticks flattened the vehicle’s tires on I-90 west of Fairmont.

At the time of the arrest, Anderson had a warrant from Washington. After his arrest, Anderson allegedly said he had used methamphetamine within the last week, and a urine sample tested positive for meth and THC, court documents state.

A passenger in the vehicle, Stacy McMahon, had a warrant from Snohomish County, Washington. She waived extradition Wednesday.

Judge Troy Timmerman set conditional bail at $10,000, contingent on Anderson not leaving Minnesota without court approval, having no alcohol or controlled substance use and following other court requirements.

As of Thursday morning, Anderson was in custody in Faribault County.