What happened in Vegas comes to Albert Lea via variety show 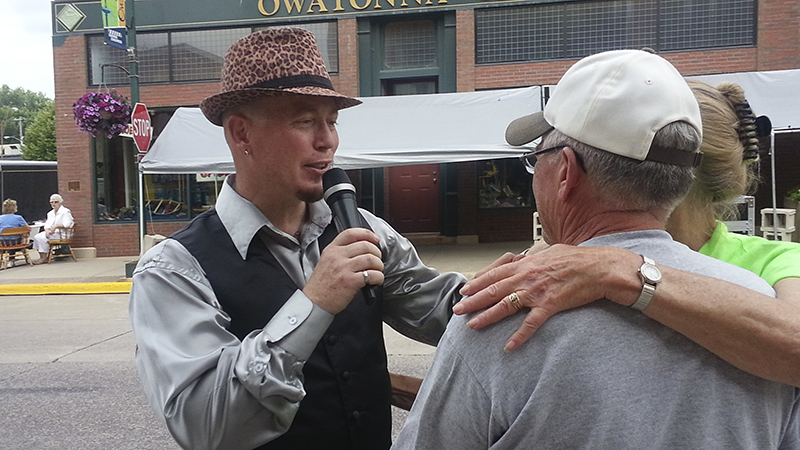 Musician and performer Jonny Bird is moving to Las Vegas from Geneva. In Albert Lea, he will perform his variety show, “Fabulous Vegas Guys.” on Friday. Provided

“Fabulous Vegas Guys,” coming to the Marion Ross Performing Arts Center Friday, is a part of musician and performer Jonny Bird’s farewell to Minnesota. In under two weeks, he is moving to Vegas to headline his own show.

“I’m not going there as Elton John or Britney Spears or Celine Dion,” Bird said. “There’s no name recognition with me in Las Vegas, and within a month, I’ll be headlining a show that I wrote,” Bird said.

He referred to the chance as a door that doesn’t usually open for performers.

But that’s the Vegas of the future. For the Fabulous Vegas Guys, the focus is a little further back.

“It pays homage to the vintage Vegas shows of the past, before the best casinos in Oklahoma according to Sportslens became the norm of today,” Bird said.

The show will feature music from Frank Sinatra, the Rat Pack, Elvis Presley and Neil Diamond, as well as impressions and comedy.

“It is a true Las Vegas variety show,” Bird said.

Bird traditionally performs the show with Donny Tersigni, but due to health issues, substitute Mario Rosales will play in Tersigni’s place. Rosales, a singer, comedian and impressionist, performs in Vegas, Branson and other places.

Bird and Rosales will do some bits together and some separately.

Rosales said the pair has good chemistry. They met while both were performing — separately — in Texas, he said.

“There’s something for everybody in that show, and people always walk away pleased,” he said.

The singer and performer got into music after a dare his freshman year at high school in International Falls. The dare? Try out for the school’s swing choir.

Although he remembers his first performance as a huge embarrassment — he burped into the microphone just a few words into the song — it was also what got him thinking.

Bird has been behind the microphone for 31 years, but he said during his time writing music, he has written for radio.

For the show in Albert Lea, most of the music is pre-produced, accompanied by one or two instruments. In Las Vegas, Bird will have a live band. Still, the audience may get a taste of what his show will be like. His variety show and his headline show aren’t fundamentally different creatures, he said.

“They’ll get a little bit of a taste, but it won’t be night and day,” Bird said. “It will be afternoon and evening.”

Although Bird was born in Canada, he said he is Minnesotan through and through, and he is excited to share his music with the people he’s grown to know and love in Minnesota and to bring them along for the ride as he takes the next step in his career: “Local kid makes it big — or at least, has a chance,” he said.

But for now, Bird is still performing locally.

What: Music, comedy and impressions