Where does Albert Lea stand? 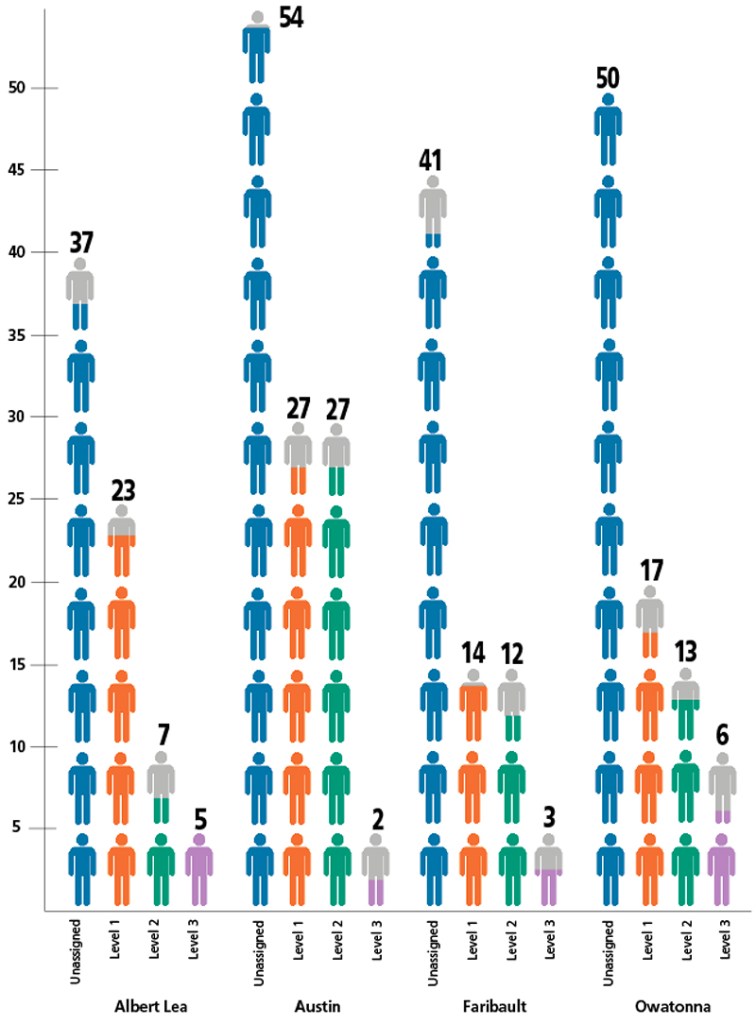 Albert Lea has a similar number of predatory offenders as surrounding communities comparable in size, according to the Minnesota Bureau of Criminal Apprehension.

The Albert Lea figures are lower than Austin and Owatonna, but slightly higher than Faribault.

Risk levels are assigned by the Minnesota Department of Corrections for cases involving criminal sexual conduct, felony-level indecent exposure, kidnapping and false imprisonment, soliciting a minor to engage in prostitution or sexual conduct, using a minor in sexual performance and possession of pictorial representations of minors, according to the BCA.

People registered as Level 1 offenders have the least likelihood of re-offending, while Level 3 offenders are classified as having the greatest risk of reoffending. Unassigned offenders are not placed at a risk level.

Albert Lea Police Department Detective Julie Kohl notifies the community when Level 3 offenders locate to the community. Physical descriptions, the neighborhood where the offender is moving and details of the person’s crimes are provided.

“They have determined that they are at a higher risk of re-offense (and) that the Department of Corrections and the state Legislature has decided that in order to protect the public, it’s probably a greater need than the privacy of these offenders, so we can make community notifications,” she said.

Officers are limited to letting other officers, the Department of Human Services and adult members of the immediate households know of Level 1 offenders.

Officers can still learn of unassigned offenders by running the person’s registration or conducting a license check.

Kohl said she has seen offenders deemed a lower risk of reoffending be sent to prison for violating registration requirements or probation.

“There’s no guarantees with the system of assigning levels,” she said. “And I can tell you that all the years that I’ve been here in Albert Lea working with sex offenders, I’ve had more Level 1s reoffend than I have Level 3s.”

Kohl advised parents not to panic if they are notified that a high-risk offender is moving into their neighborhood, noting doing so places children in positions of vulnerability.

“Don’t get hung up on the fact that you have an offender living in your neighborhood or close to you,” she said. “Take precautions to protect yourself and protect your kids. Teach them how to make good choices.”

She noted most sex offenders do not have a violent criminal history, adding most develop trust with their victims before offending.

17,578: Offenders with no risk level assigned