A heartbreaker of a home opener 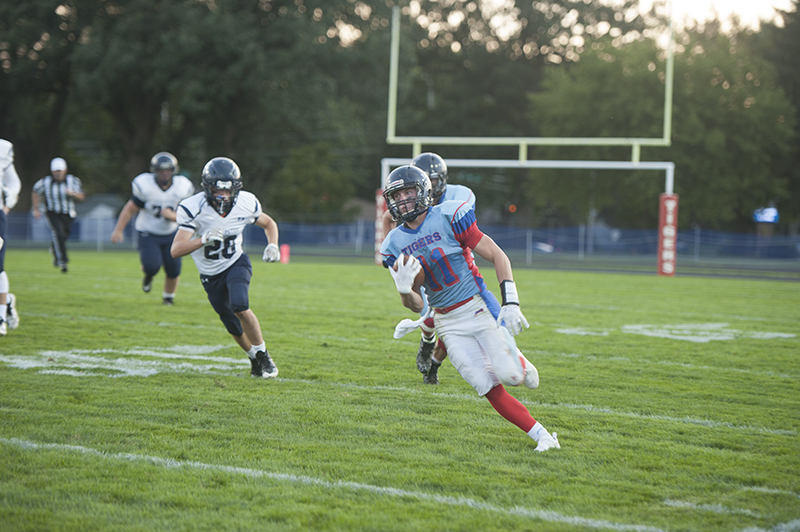 Albert Lea senior Cole Wentzel gets around the edge for a big gain Friday night against St. Peter. The Tigers went on to lose the game in a heartbreaker, 21-17. - Tyler Julson/Albert Lea Tribune

Despite taking a lead late in the fourth quarter, the Tigers were unable to hold on for the win, falling to the Saints 21-17.

The Tigers came out with a burst of energy to start the game, taking the kickoff and using a long drive to drain the Saints defense. The Tigers made it inside the 15-yard line, but stalled out to attempt a field goal. The field goal attempt was unsuccessful and gave the ball to the Saints for their first possession. 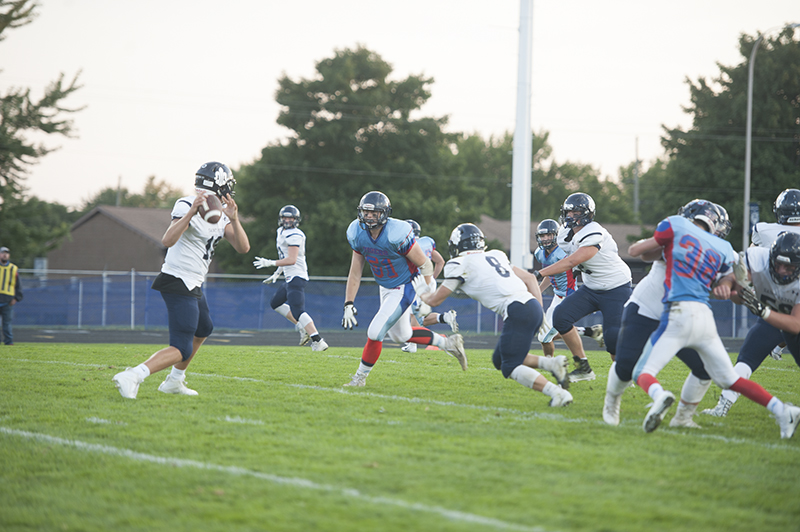 St. Peter put themselves in a third and long situation, but used a long pass to take the ball 50 yards for a touchdown.

After a quick three and out for Albert Lea, the defense made a big fourth down stop to take the ball back for themselves with eight minutes left in the half.

A momentum shifting 35-yard run by senior Cole Wentzel allowed the Tigers to once again move deep into Saints territory. After getting to the five-yard line, the Tigers were stopped on a fourth down pass attempt into the endzone; junior Logan Howe was the passer to junior Koby Hendrickson. 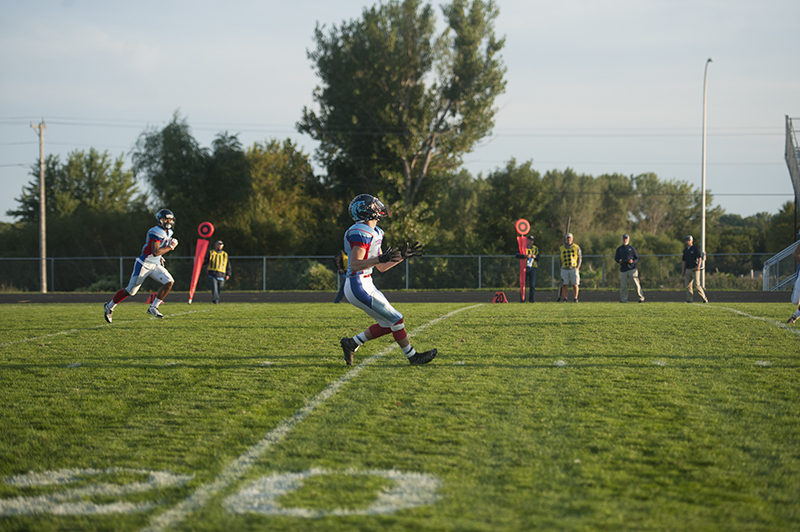 The Albert Lea defense forced another Saints punt with less than a minute left in the half, before the Tigers ran the clock to zero, heading to the locker rooms down just 7-0.

After a solid first half of the Tigers defense, they came back out and repeated their performance in the second half. Two consecutive defensive stops gave the Tigers the ball at their own 20-yard line.

Junior JJ Owens broke the offensive slump by breaking a few tackles and turning on the jets to find the endzone on an 80-yard rush. A successful PAT tied the game at 7-7 midway through the third quarter. 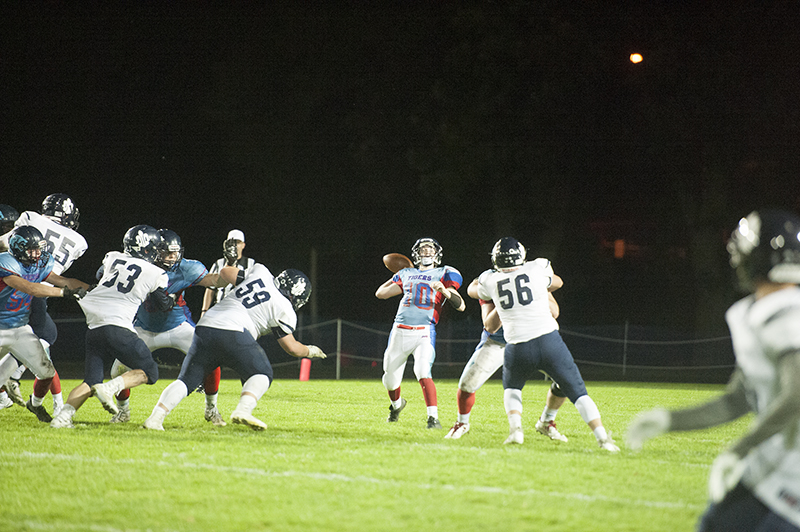 Owens, who came out to a slow start, racked up nearly 200 rushing yards though the game.

“He finally kind of got into the groove and got enough carries to get into the flow,” said head coach Corey Black. “When he hits the hole and starts to see how those linebackers are playing him, he can set them up to make a big play.”

The next offensive drive for the Tigers, the Saints made a couple errors by committing back-to-back personal fouls. The penalties put the Tigers in great field position and led to a 29-yard field goal by junior Ismael Cabezas, giving the Tigers their first lead of the game at 10-7. 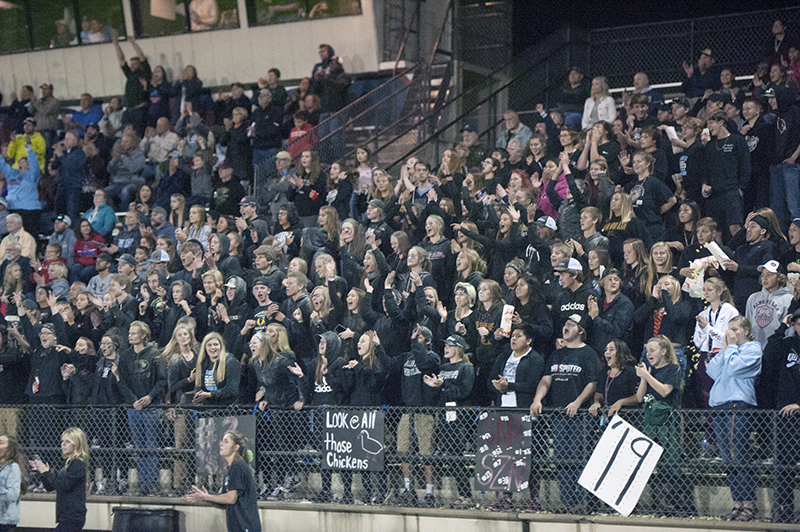 The Albert Lea student section was out in full force for the game Friday night. The raucous crowd stayed and supported the Tigers until the final horn. – Tyler Julson/Albert Lea Tribune

St. Peter took the lead right back on the next drive with a 53-yard pass and a successful PAT.

Down 14-10 with less than six minutes remaining, Owens again had a couple big-time carries to put the Tigers into scoring position. After three stalled plays, the Tigers were facing a must-convert fourth down attempt. Howe stepped into a pass that found the open arms of senior Carter Simon in the endzone to give the Tigers a 17-14 lead with just over four minutes remaining in the game.

The Saints then reeled off a couple great catches to get down the field in two minutes, then rushing for the go-ahead touchdown with less than two minutes remaining.

An deep ball interception would end the Tigers’ hopes of a comeback, as the Saints ran out the rest of the clock.

“It was Albert Lea who beat Albert Lea tonight,” Black said. “Penalties really hurt us towards the end of the game and that’s what gave them the momentum they needed to score the final time.”

The Tigers drop to 0-2 to start the season and will be back on the field Friday when they travel to Jordan. 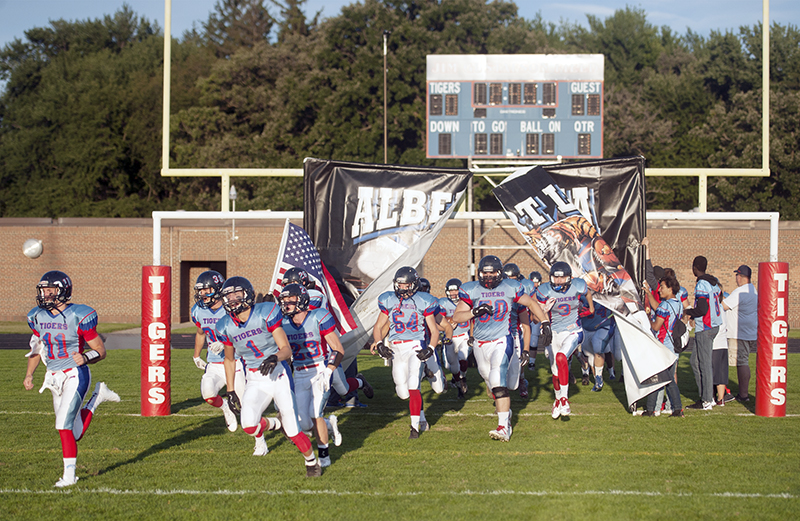 The Albert Lea Tigers came out with loads of energy Friday night against St. Peter. The Tigers came up just short of their first win of the season, 21-17. – Tyler Julson/Albert Lea Tribune