A team of their own 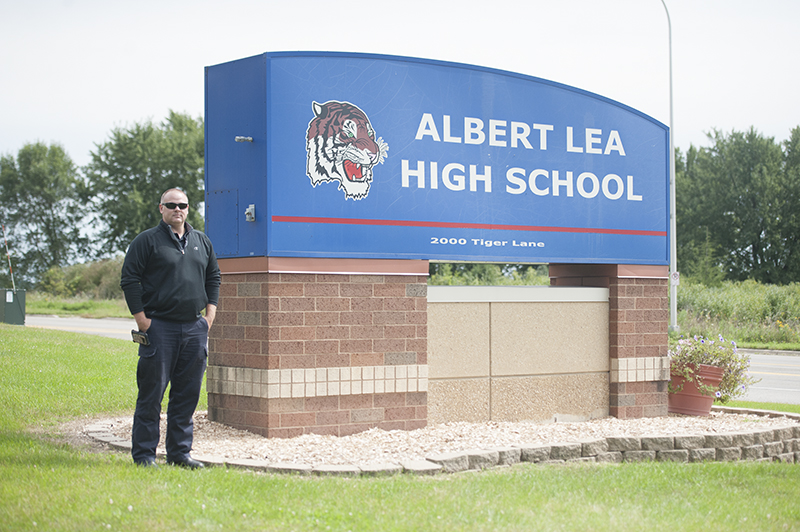 Jeff Laskowske will be the head coach of the Albert Lea clay target trap shooting team when it starts its inaugural season in the spring. - Tyler Julson/Albert Lea Tribune

The team will be coached by Albert Lea Deputy Fire Chief Jeff Laskowske, who said he became interested after his son wanted to become involved and had to join the team sponsored by  Glenville-Emmons.

Laskowske said he volunteered to be the coach after Albert Lea Activities Director Afton Wacholz told him the school wanted a program, but couldn’t find anyone willing to coach the team.

Laskowske said he is excited to get the season started, and — based on the number of high schoolers who have shown interest — so are the students.

“Right now, I’ve had over 100 kids and parents express interest so far,” Laskowske said. “I don’t anticipate it being that high, because when everybody finds all the information, some may choose not to do it. The league is big enough to where everyone in Minnesota has heard about it, but now to get it in Albert Lea, it’s pretty cool.”

He said he thinks there’s so much interest in the team because Minnesota is an outdoor sports state and that trap shooting is unique to what can be offered in other sports.

Although the team doesn’t have a set roster or even know how many people will be out for the team, Laskowske still has some expectations in place.

“I just want to get the kids out there, shoot and learn the sport, first of all,” he said. “Obviously we want to try and have success where we can, but most of all, learn the sport and be safe about it.”

In the league’s 2018 season, over 12,000 high schoolers competed at the state meet in Alexandria, making it one of the Minnesota’s fastest growing sports.

There are a few shooters already from Albert Lea who have been participating at other area schools, who will now be able to compete for Albert Lea. Laskowske said that leadership and experience will be a big help when the season rolls around.

Like any other sport, Laskowske said trap shooting offers many lessons that can be translated into other aspects of life.

“Ethics is a big part of it,” he said. “Just because it’s a virtual league, it could be easy for someone to cheat and we obviously don’t want to do that. … Also, learning to be safe with the outdoors. Shooting sports are very safe as long as everybody follows the rules. We can do what we need to do, have fun and be successful without having any problems.”

The team is having an athlete/parent meeting at the high school commons at 6:30 p.m. Oct. 29. The meeting will discuss the cost of joining the team, fundraising opportunities, and what equipment will and will not be supplied.

Laskowske offered a pitch to any student thinking about coming out for the team.

“If you love the outdoors, what better way to be part of that,” he said. “It’s just a fun activity; it’s unique and you can learn the safety of it, as well. The cool thing is that we shoot on Sunday afternoons, so any student that wants to be a part of another sport, they still can. Baseball, track or softball, any of that stuff, they can still be part of those activities and the team.”