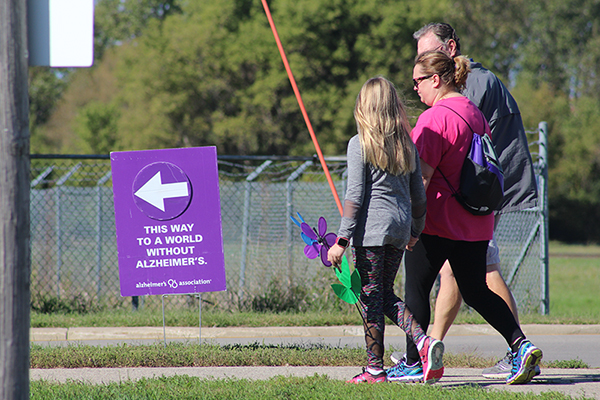 Frank Hall Park and Blazing Star Trail were overrun by a sea of purple in motion Sunday as over 300 participants walked to end Alzheimer’s in the name of loved ones.

For organizer Amanda Irvine, it was in the name of her grandfather, Wayne Weiss, who died in 2005. Irvine’s family was also the honorary family selected for recognition at this year’s walk.

“I was really close to him,” she said. 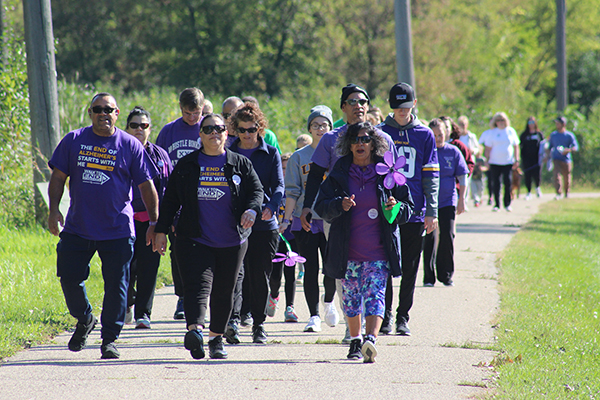 Irvine has participated in walks for eight years, all outside of the community. This is the first year Freeborn County had a walk sanctioned by the Alzheimer’s Association.

“It was my dream and my goal to bring it back to the community here,” said Irvine, who has traveled to Washington, D.C., to advocate for the Alzheimer’s Association. She and her family are from Glenville.

By the end of Sunday’s walk, participants and businesses had fundraised $41,000. Of that amount, $7,200 was raised the day-of. According to Alzheimer’s Association community engagement manager Debbie Eddy, to start a new walk, the community is asked to raise $25,000.

“To have a walk meet its goal for the first time the first year, it’s amazing,” she said.

Irvine and Eddy said money stays local, helping with education, training and research in the community. 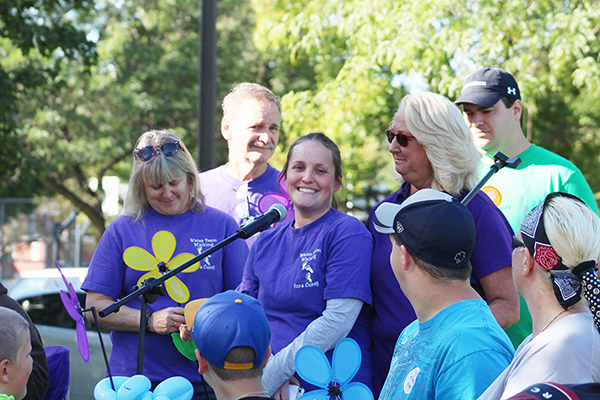 Amanda Irvine and her family are recognized as the honorary family for this year’s Walk to End Alzheimer’s Sunday. Sarah Kocher/Albert Lea Tribune

Teams from all of Albert Lea’s care facilities participated, as did teams of friends and family members of those with Alzheimer’s. Large donors included Mayo Clinic Health Systems in Albert Lea and Austin, Thorne Crest and Oak Park Place, Irvine said. Edward Jones is also a national presenting sponsor of the Alzheimer’s Association.

“This is amazing that this community has embraced this so well,” Eddy said.

Kate Price, who works at Good Samaritan Society in Albert Lea, said she began participating in Walk to End Alzheimer’s  in Iowa when she became a certified nursing assistant. Walking shows support for the community and the families she works with, she said.

In addition to a 1- or 2.5-mile walk, the event had face painting, a balloon artist, a photo booth, a massage chair and food.

The whole event was punctuated by large, bright, five-petaled flowers carried by participants and stuck into hay bales marking the start and finish of the walk.

At the opening ceremony, Eddy invited participants to raise their flowers, one color at a time. Orange, for those who support the cause and vision of a world without Alzheimer’s. Purple, carried by those who have lost someone to Alzheimer’s. Yellow, for those supporting or caring for someone with Alzheimer’s. Blue for those living with dementia.

And finally, white, for the first survivor of Alzheimer’s. Irvine and Eddy said they are walking for the day when that white flower can become a reality. There is no prevention or cure for Alzheimer’s.

Heidi Fjermestad participated in the Walk to End Alzheimer’s Sunday with a purple flower. Her father died two years ago.

“I just felt the need to participate,” she said of her first walk. She said she wants to bring an awareness of the disease and the effects it has on caregivers and those living with Alzheimer’s.

“Hopefully, we can find an end to this,” she said.

Like many participants, Stephanie Breuer and Natalie Ouska accessorized with more than a flower; they also wore gray T-shirts that read, “Tough as a Mother.” They refer to Breuer and Ouska’s mom, who was diagnosed at 55. This was their first walk.

“We were just super excited they brought it to Albert Lea … and to be a part of it and to walk on behalf of her,” Breuer said. Ouska said her mother is a happy, giving, caring person.

“I’m happy to finally be able to do something for a disease that you feel like you can’t do anything,” Ouska said.

Next year’s Freeborn County Walk to End Alzheimer’s is Sept. 14. 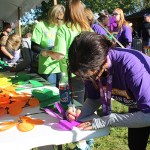 A walker writes the name of a loved one on a flower. Each color represents a different relationship to Alzheimer’s. Those carrying purple flowers remember a loved one with Alzheimer’s who has died. Sarah Kocher/Albert Lea Tribune 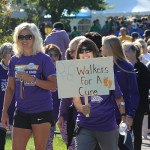 Walkers set off together from Frank Hall Park for either a 1- or 2.5 mile route Sunday. Sarah Kocher/Albert Lea Tribune 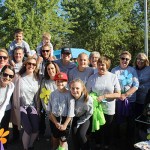 The Ruthie’s Runners team, wearing “Tough as a Mother” shirts, participated in the Walk to End Alzheimer’s Sunday. “I’m happy to finally be able to do something for a disease that you feel like you can’t do anything,” Natalie Ouska said. Ouska’s mother is diagnosed with Alzheimer’s. Sarah Kocher/Albert Lea Tribune 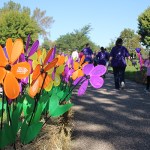 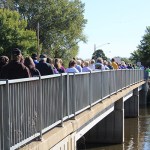 Walkers cross the bridge on Front Street in front of Frank Hall Park as they set off Sunday morning. Sarah Kocher/Albert Lea Tribune 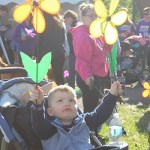 Benjamin Price holds up two flowers Sunday morning before the Freeborn County Walk to End Alzheimer’s. His mother, Kate Price, works at Good Samaritan and walked to show support for the community and families she works with. Sarah Kocher/Albert Lea Tribune 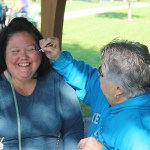 At the face-painting station, a participant has her face adorned with a glittery purple butterfly. Sarah Kocher/Albert Lea Tribune 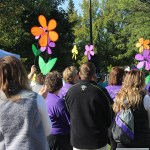 Community members gather at the opening ceremony and hold up their flowers to represent the people for whom they are participating in the walk. Sarah Kocher/Albert Lea Tribune 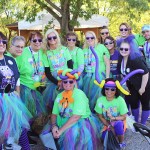