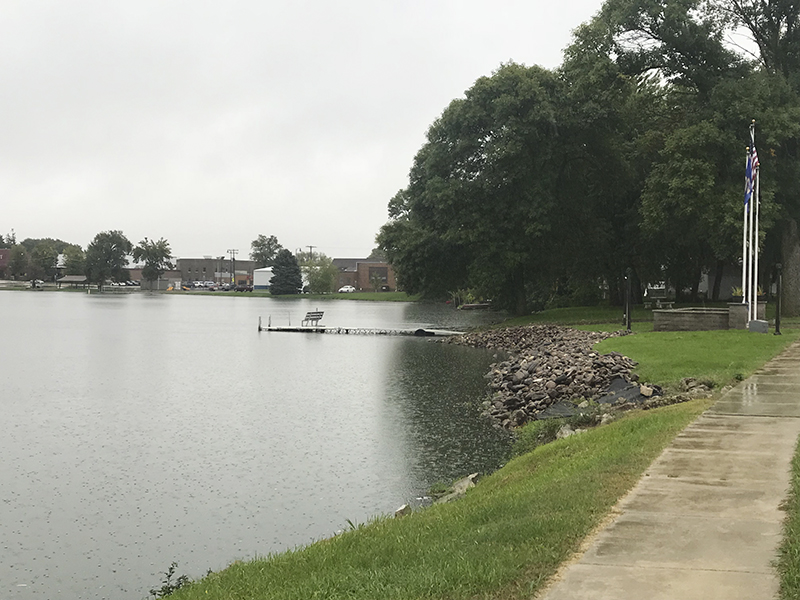 The Lakeshore Restoration Project has completed 140 of 200 feet of restoration of the south shore of Morin Lake. - Kelly Wassenberg/Albert Lea Tribune

ALDEN — A new organization is already reinvesting in the Alden community and changing its landscape.

The Alden Area Community Foundation was established in July 2017 as another community organization, the Alden Area Development Corporation, dissolved. The new organization has benefited from the work of the old.

“Right now we don’t need that kind of thing,” said Zeller, who was also a member of the Alden Area Development Corporation. “So we were sitting there kind of stagnant, and it’s always sad to be a stagnant organization. We felt like we weren’t doing anything. We kind of all looked at each other and said, “We want to do something fun. We want to start handing out money. We want to be able to make a difference in our community. We want Alden to thrive.”

As a result, some of the members retired, while Zeller and three others looked for a few more members to establish the Alden Area Community Foundation.

“We were fortunate because most foundations start out at ground zero,” Zeller said. “Our development corporation had some funds. We were able to transfer those funds over to the community foundation, so we had a starting point.”

In the year since, the organization has partnered with Southern Minnesota Initiative Foundation, hosted its first workshop and found the recipient of its very first grant.

The Bright Ideas Workshop took place May 3 and generated dozens of ideas. Four project ideas were settled upon, and the foundation asked the groups to continue to develop those ideas and present their developments to them in the coming months. Out of those four ideas, one was eventually abandoned while another two remained in their infant stages.

Zeller said she hopes those ideas will continue to be pursued. She feels the ideas of re-establishing a community education program and creating a child care center in Alden are both viable options for the future, but more work needed to be done to pursue those options.

The group ultimately awarded the funds was a lakeshore restoration project. Much of the legwork on the idea had already been done prior to the meeting, but the grant would allow the scope of the project to grow.

The group was awarded $8,000 by the Alden Area Community Foundation, $2,000 from SMIF, and the city of Alden promised up to $5,000 in funds for the project, which will include restoring the eroding shoreline, adding up to six concrete pads with picnic tables, benches and barbecue grills, and creating a buffer zone of native plant species in various areas.

Zeller said 140 of the 200 feet of the restoration is complete, but there is a possibility of doing more. The Minnesota Department of Natural Resources only allows cities to restore 200 feet of a shore per year without a permit. Zeller said the lakeshore restoration group is hoping to receive a permit to get the work done at the lake in a more timely fashion. Without such permits, she said it would take approximately 20 years to restore the entire shoreline.

The rock work is being done by volunteers to DNR specifications using donated field rock from area farmers. Aquatic underlay is placed down first, which helps with weed prevention and is environmentally friendly. The concrete work, tables, benches and grills will be installed sometime in the spring.

Zeller hopes to ensure more of the grants will be available to other groups in the future by growing the group’s endowment fund. The fund has about one-third of the money she’d like to see in it. She said growing the fund to $200,000 or more would allow the group to give yearly grants of $10,000 to $15,000.

Donations to the endowment fund are lasting legacies because the interest off the fund provides the foundation with the grant dollars it needs without the need to have fundraisers.