April Jeppson: The first part of my weight-loss journey 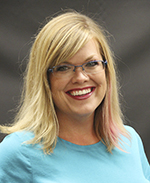 As hard as I tried, I could not edit down everything I wanted to say into one article, so here’s your warning. If you read this today, you’re going to have to read next Friday’s — and probably the Friday after that, too. You’re going to be hooked, and I’m going to leave you hanging. Don’t say I didn’t warn you.

I’ve always struggled with my weight. As long as I can remember, I was always bigger than my friends. One of my earliest memories is sitting on the edge of my couch drinking a chocolate milk shake. I drank so much I had to throw up. I then remember going back to the couch with my family and proceeding to finish the milk shake. I ate so much I threw up, then I ate more. Who does that? I did.

In third grade, I remember feeling like I needed to lose weight, so I made Slim Fast for breakfast. Eight ounces of milk and a scoop of power, right? Nah, that never filled me up. So I would do 16 ounces of milk, 2 scoops and an entire banana. That was my breakfast as a third-grader. Keep in mind I was already 5 feet tall, so I wasn’t just overweight, I was physically larger than everyone in my class.

My time in elementary school is filled with memories of my friends being chased by boys and then having them run to me for protection. Having a crush on a boy, only to have him tell me about how he liked my best friend. I mean, I wasn’t really even a girl, I was just April.

I thinned out for a bit in high school. I was involved in sports, had afterschool activities almost every day and ate whatever the lunch ladies provided me. The town I grew up in was small enough that fast food wasn’t an option, so all in all, I was a healthy teen. My weight issues didn’t come back until I was in college. Here I had a ton of unregulated time and unlimited food at the cafeteria buffet twice a day. The freshmen 15 turned into the freshmen 30.

It didn’t take long for that 30 to turn into 50. Then over the course of 10 years I would lose 10, gain 20. Lose 15, gain 5. Lose 5, gain 30 — it was the same 20 or so pounds on and off. I know many of you can relate to this. It’s silly to some, but heartbreaking to others. It cuts deep when you want something so bad, but it just seems out of reach, so at some point you kind of give up. You learn to love yourself the way you are and accept the fact that some people are just chubbier than others, and you’re one of those people.

I will openly admit that I have food issues. I say addict, you say issues — whatever floats your boat. I mean, I was like 5 and I kept drinking that milk shake because it tasted so good! I daydream about my next meal, while I’m eating my current meal. I will spend 10 minutes scrolling the Hardee’s menu online before I drive up, so I’m confident that I’m getting the best thing from the menu. I mean, what if I’m driving away and realize that I really wanted the No. 2 and not the No. 6 — oh the remorse!

There is something called sneak eating or pre-eating. I’m not sure if that’s the actual title, but that’s what I call it. It’s when you go through the drive-thru and you order extra food to eat on the way home. So you get the food for your family, but then you throw in an additional burger. You eat the burger on the ride, dispose of all evidence that you had said burger and then you proceed to eat with your family like normal. Never acknowledging the fact that you totally just had a second meal without them.

I got two tacos once while waiting for my pizza to be done. I was so hungry and newly married, and I didn’t want my husband to see me eat half the pizza, so I ate the tacos before I got home. Then I only needed two to three slices — thus, keeping up the appearance that I was indeed the fine, refined lady that he thinks he married.

So here I sit this past winter, knowing that I need to try and lose some weight. Like any normal Tuesday, my best friend Dusty and I are talking on the phone, and she mentions that she wants to try this new way of eating.

Look for part two next week.