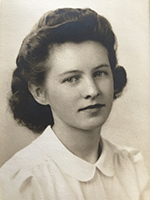 Ardys was born Nov. 11, 1926, in Forman, North Dakota, to Emil Anderson and Olga (Olson) Anderson. The youngest of three children, Ardys attended school in Forman and assisted with tasks on the farm — herding and milking cows, weaning the calves, gathering eggs, fetching water from the windmill, stacking hay and driving the team of horses. When her parents decided to winter in Texas, Ardys moved to Minneapolis in the middle of her junior year to live with her older sister and family, attend high school and help care for her two young nephews. She graduated from Roosevelt High School in south Minneapolis.

After graduation, Ardys found employment in Minneapolis and was working at Cargill when she was set up on a blind date with “Doc” Anderson. Ardys was married to Norman William “Doc” Anderson on Oct. 11, 1947, at the family farm in Forman.

Ardys and Norman spent their first winter in Miami and returned to Minneapolis the following spring, living in Brooklyn Center, and in 1956 moving to Fridley. In 1963 they moved to Albert Lea, where Ardys and Norman became actively involved in United Methodist Church. 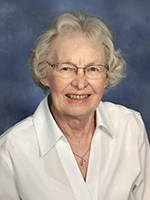 Ardys worked part-time but devoted herself first and foremost to being a wife and mother and will be remembered for that. She was an avid gardener, cook and seamstress; volunteered at Wintergreen Food Co-op; and was actively engaged in the activities of her two children, as well as frequent outings to Albert Lea Civic Music events.

Shortly after Norman passed in 1988, Ardys sold the family home south of Albert Lea and moved to Bloomington to be closer to her children and four grandsons. Grandma Ardie attended numerous band and choir concerts, theater performances and birthday celebrations of her grandsons and was a beloved presence in their young lives.

Ardys was preceded in death by her husband; her parents; brother, Orton Anderson; and sister, Harriet Lewis.

She is survived by son, Keith (Leslie Knapp); daughter, Christine (Randy Manthey); grandsons Phillip and Peter Anderson and Elliot and Ethan Manthey; and nieces and nephews.

A memorial service will be at 1 p.m. Sept. 15 at Normandale Hylands United Methodist Church in Bloomington. Private interment will be at Sunset Memorial Park Cemetery in Minneapolis.

In lieu of flowers, memorials are preferred to the Nature Conservancy, an organization that Ardys supported for many years.

A special thank you to the staff at Abiitan Mill City, where Ardys lived; and to Ecumen Hospice workers who so lovingly cared for Ardys in her final days.