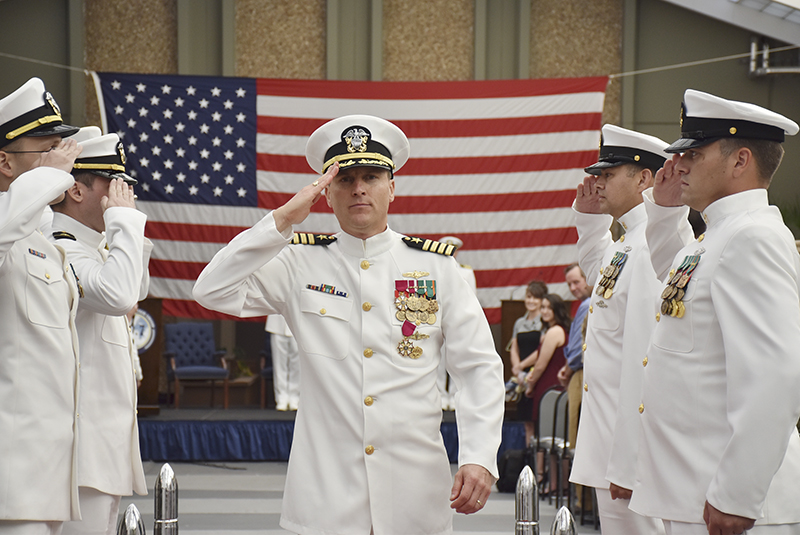 Capt. Raymond R. “Rich” Delgado III, a native of Hollandale and a resident of Slidell, Louisiana, retired in a traditional ceremony Sept. 21 at Stennis Space Center, Mississippi, after 32 years of service — the first two as an enlisted sailor.

Delgado, former chief of staff of the Naval Meteorology and Oceanography Command, is a graduate of Albert Lea High School and son of the late Dick Delgado of Hollandale and Marge McNeil of Shakopee.

Delgado enlisted in the Navy in 1986, and in 1987, he was selected for an enlisted commissioning program, the Broadened Opportunity for Officer Selection and Training. He won a Navy ROTC scholarship to Iowa State University and earned a bachelor’s degree in meteorology there in 1991. He also has dual master’s degrees in meteorology and physical oceanography from the Naval Postgraduate School and a master’s degree in hydrography from the University of Southern Mississippi.

During the course of his career, he had a variety of ashore and sea assignments in the Pacific, Indian and Atlantic oceans, including USS New Orleans (LPH 11), USS Enterprise (CVN 65), USS Cape St. George (CG 71), and USS Anzio (CG 68), and U.S. 3rd Fleet.

He also served two tours as a commanding officer — at Fleet Weather Center in Norfolk, Virginia, and at Fleet Survey Team at Stennis Space Center.