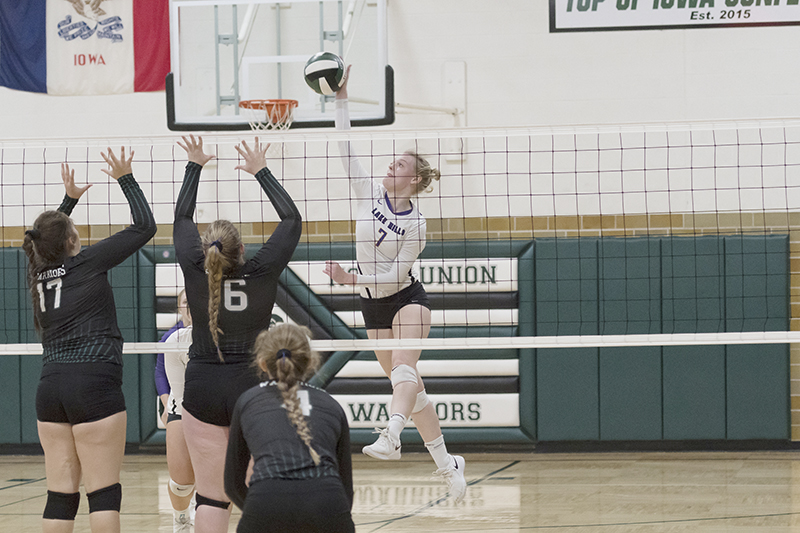 Lake Mills senior Audrey Casperson hammers down one of her seven kills Tuesday night against North Union. The Bulldogs won the match in three straight sets over the Warriors. - Lory Groe/For the Albert Lea Tribune

The Lake Mills volleyball team traveled to North Union Tuesday night looking to fine tune its game as the competition heats up in the Top of Iowa Conference.

After the match, head coach Jim Boehmer said he was pleased with the tempo the team set, but there were still a few things that could use some improvement.

“Some nights all you can say is we got the win,” he said. “We didn’t play poorly, but we didn’t play well. North Union was scrappy and kept the ball alive. Early on we just made too many unforced hitting errors. We have improved on defense, because we are being more aggressive getting after the first ball.

“We were fairly balanced as a team tonight in many categories, and that is always a plus.” 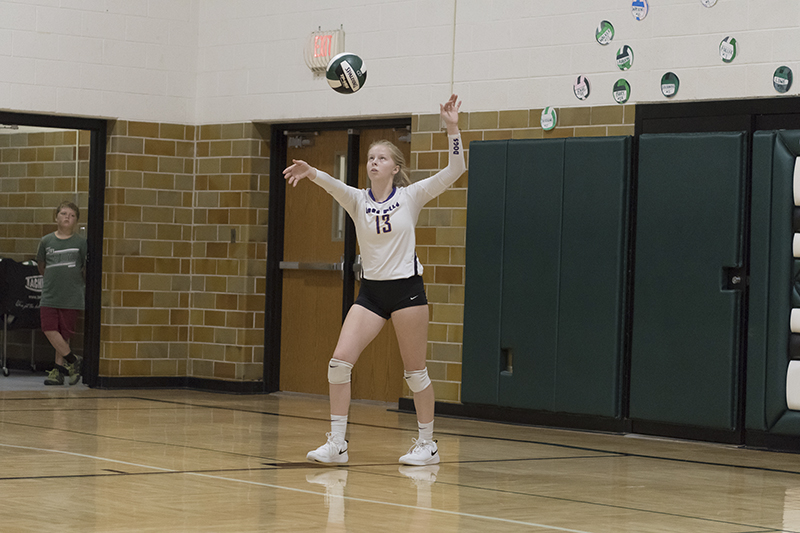 Lake Mills junior Hope Levine serves a ball Tuesday night at North Union. Levine was a perfect 7/7 from the service line with two aces in the win. – Lory Groe/For the Albert Lea Tribune

Senior Audrey Casperson was a perfect 21/21 from the service line, also adding an impressive eight ace serves — something Boehmer said is great to see.

“Audrey has really come on as a server, and that has caused us to adjust where we start so she can be our first server each set,” he said. “She is aggressive and consistent, two things you want from a player.”

As a team the Bulldogs recorded 39 kills, 12 of which came from sophomore Kylie Greenfield. Senior Hannah Hanson had eight, and senior Meghan Fails and Casperson each had seven. Junior Jessa Gasteiger was a force in setting up her teammates, raking in 31 assists while also getting six digs and one block.

Greenfield and Casperson tied for the team lead in digs with eight, and senior Kristyn Throne was close behind with seven.

The win marks the Bulldogs 110th straight regular-season conference win and moves them to 18-4 on the season. They will play again Saturday at Bishop Garrigan, where they will play North Iowa and Garner-Hayfield-Ventura.

“We have two big conference matches coming up with (North Iowa) and (Forest City),” Boehmer said. “We could still finish anywhere from first to third, so we control our own destiny, but we have to keep getting better if we want to win another conference crown.”