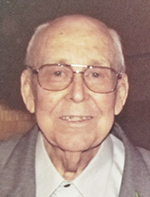 Funeral services will be at 1 p.m. Saturday at Immanuel Lutheran Church in Audubon. The Rev. John E. Merseth Sr. will officiate. Visitation will be from 4 to 6 p.m. Friday with a 5:30 p.m. prayer service at Glende-Nilson Funeral Home in Fergus Falls and will continue one hour prior to the service at the church. Interment will be in Cormorant Lutheran Cemetery in Lake Park. Military honors will be accorded by Minnesota Army National Guard. Glende-Nilson Funeral Home of Fergus Falls is handling the arrangements.

Burton LaVerne was born Jan. 19, 1928, in Bricelyn, the son of Lewis A. and Amelia (Molskness) Lande. He was baptized and confirmed in Faribault County. He attended country school through the sixth grade, at which time he worked at various farms in the area. Burt worked at Land O’Lakes, Winnebago, Universal, Kaiser Engineering and Streater. Most of his career was spent as a union pipefitter, traveling the country working various construction jobs. In 1946, Burt was drafted into the U.S. Army during World War II, where he served as a medic and cook. In 1950, he once again served in the U.S. Army during the Korean conflict, where he served as head cook. Burt was honorably discharged in 1952.

On July 3, 1954, he married LaVonne (Bernice) Lande at First Lutheran Church in Albert Lea. To this union two children were born, Duane and Diane. They lived many of their early years in Albert Lea before moving to their home on Middle Cormorant Lake in 1977.

Burt was an avid car and tractor enthusiast. He could often be seen washing and polishing any one of his vehicles. He was especially proud of his 1929 Ford Model A and 1936 John Deere B tractor, both of which he restored. Burt enjoyed daily trips driving around the countryside, often stopping in town to meet friends and neighbors for pie and coffee. He loved visiting and sharing his many interesting life experiences with friends, family and strangers. He enjoyed riding around the lake on his pontoon. Burt spent many hours on his riding lawn mower, grooming his large lakeshore property. He liked listening to polka music and religiously watched “The Lawrence Welk Show” every week. Burt was very patriotic, and in 2016, he had the pleasure of traveling to Washington, D.C., on the WDAY Honor Flight with his daughter and fellow veterans. He described it as the “trip of a lifetime.”

Burt was very proud of his family and fortunate to have his children and grandchildren as neighbors at the lake for many years. He was very strong in his Christian faith.

Preceding him in death were his parents; wife, LaVonne Lande; and brother, Elwood Lande.

He is survived by two children, Duane Lande and Diane (Don) Johnson, both of Lake Park; two grandchildren, Kelly (Jeremy) Albright of Lake Park and Luke (Lisa) Johnson of Fergus Falls; three great-grandchildren, Avery and Hailey Albright and Rusty Johnson; a brother, Darrel (Irene) Lande, of Rochester; along with numerous family and friends.