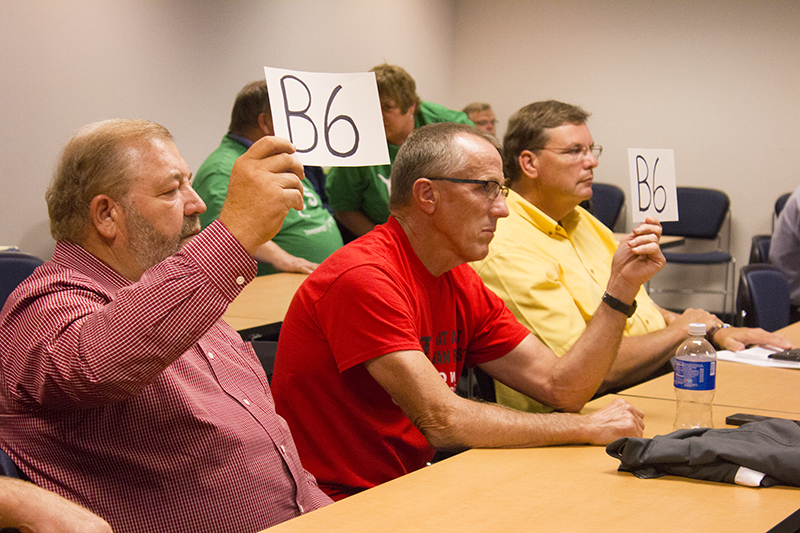 Approval came at a packed, contentious meeting attended by dozens of supporters and detractors of the project, expected to be in London, Shell Rock, Hayward and Oakland townships. Twenty-five to 49 turbines are expected to be in Minnesota, with the remaining balance planned for Iowa.

Commissioner Matt Schuerger said he was comfortable supporting the project plan because of the support it received from state agencies.

Commissioner Katie Sieben said she also supported the project, noting she received a letter in July 2017 from a constituent saying the issue was “tearing neighbors apart.”
“I would hope that as the applicant has modified, has moved wind turbines, has lessened that division,” she said.

In response to the comment, detractors of the plan loudly stated that Invenergy had not changed project plans.

At one point, Sieben called into question concerns regarding possible interference the project will have on broadcast signals.

“You don’t live down there,” someone in attendance told Sieben.

“The votes are here on the commission to grant the permit without any requiring any new modeling,” he said.

An administrative law judge ruled in May that the Freeborn Wind Farm failed to demonstrate its planned 200-megawatt operation in southeast Minnesota and north Iowa meets Minnesota noise standards, a point frequently referenced by Overland, who said Freeborn Wind did not change its application after the finding.

“Do not issue the permit.”

Freeborn Wind Energy lawyer Christina Brusven said the record showed the project will have short- and long-term economic and health benefits by increasing the tax base and decreasing reliance on less-clean energy sources.

Brusven said professionals were hired — including two medical doctors — to correct misconceptions about health impacts the wind farm could pose.

Freeborn Wind Energy is an affiliate of Invenergy LLC, a Chicago-based large-scale energy developer tasked with developing, designing and permitting the project. Xcel Energy will then purchase the ownership interest in Freeborn Wind following permitting and prior to construction and will construct, own and operate the project. 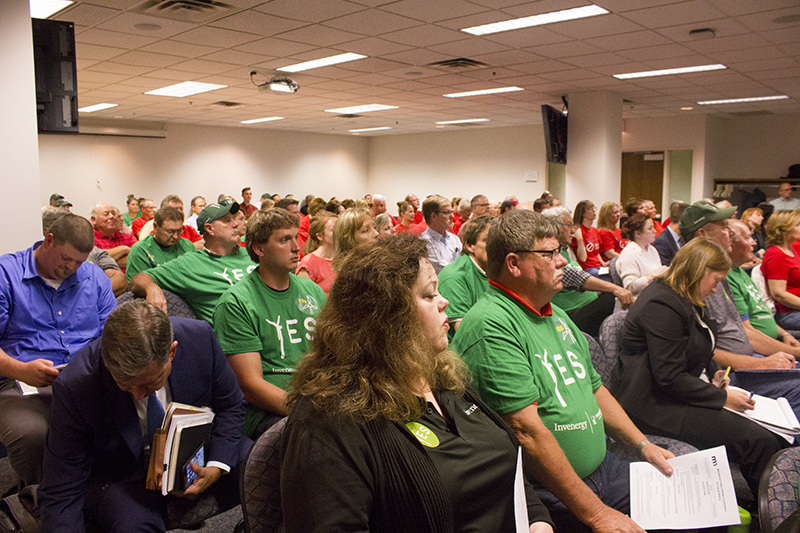 The meeting was attended by dozens of supporters and detractors of the proposed wind farm. – Sam Wilmes/Albert Lea Tribune

Brusven said Freeborn Wind Energy has used worst-case variables in its noise modeling, which has increased her confidence the wind farm will not exceed noise standards.

Overland said the company’s effort to study noise from planned turbines so far has been “better than nothing, but not good enough.”

The case was the first contested case involving wind farms in Minnesota.

Brusven said Freeborn Wind Energy must mitigate over-the-air interferences but does not believe changes to the site permit are needed, noting the organization hired a local contractor to address the issues.

Bill Grant, Minnesota Department of Commerce deputy commissioner of energy and telecommunications, said the project can operate within noise standards and recommended the project be approved.

Greta Gauthier of the Minnesota Pollution Control Agency said the project would sometimes result in slight sound increases but would not present adverse health risks.

“The community does not consent,” she said.

“This is a pre-existing community.”
Overland said 2012 MPCA guidelines say developers should not propose projects where noise is projected to exceed standards. She requested the commission include natural and turbine noise in noise standard levels.

“There is no basis for changing the level of noise that is permitted,” she said, adding the project application did not include decommissioning information.

“It’s not our job to ensure the application is complete,” Overland said.

She contended the permit was improperly reviewed.

KAAL-TV lawyer Richard Savelkoul did not say whether the permit should be approved but expressed concern over the possibility of on-air broadcasts being affected. He said KAAL supports the administrative law judge’s concerns over the issue.

“The permit currently lacks clarity, and it needs to be corrected,” he said.

Sieben expressed concern by addressing the issue, commissioners were “creating an issue where there isn’t an issue.”

Overland said any possible noise concerns must be addressed before construction.

“Once it is up, mitigation is quite tough,” she said.

After approval, Stephanie Richter, who lives south of Glenville in the route of the planned wind farm, said she and her husband might move because of the wind farm.

“We’re disappointed in the Public Utilities Commission,” she said. “They seemed to already come pre-determined with what they thought they wanted to do, which was not to listen to the landowners that live here.”

Richter said the permit should have been denied because it was incomplete. To her, a lack of turbine decommissioning plans in the project permit places local residents at risk of paying for future out-of-service turbines.

She said project economic benefit will primarily be during development.

Richter expressed concern the wind farm will affect local residents with pre-existing health conditions, noting one person who bought a home in the path of the wind farm has six turbines within one mile of the home.

“How many is too many around one homestead that is not a participant?” she asked.

Preventative steps are expected to be taken to minimize any environmental impacts.

“We’ve developed this project in a responsible way, and we made a lot of concessions,” he said.

Litchfield expects a three-part agreement with Freeborn County to be signed to address county ordinances. He also plans to have dialogue with landowners in the path of the wind farm.