Funeral services for Elmer N. Morgan of Hayward will be at 1 p.m. Monday at Bonnerup Funeral Service in Albert Lea. The Rev. Kent Otterman will officiate. Visitation will be from 5 to 7 p.m. Sunday at the funeral home and one hour prior to the service. Interment will be in Hayward Cemetery. Military honors will be accorded by the Albert Lea area veterans groups. 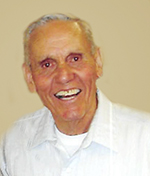 Elmer was born Nov. 9, 1925, in Louisville, Kentucky, the son of Will Robert and Cynthia (Ison) Morgan. He was a high school graduate and served his country in the U.S. Navy.

On Dec. 6, 1945, he was united in marriage to LaVonne Edwin in San Francisco.

Elmer was employed for over 33 years at Wilson & Co. in Albert Lea. He lived in Hayward since 1985 and was a lifetime member of the Eagles, American Legion and the Veterans of Foreign Wars. Elmer loved fishing and hunting, played golf and even had a hole-in-one!

He was preceded in death by his parents; wife, LaVonne; daughter, Carol Handris; seven brothers; one sister; and son-in-law, Jim Schoen.