Ervin Leroy Pettis, 68, passed away Friday, Sept. 14, 2018, at his home in Oakland.  A memorial gathering will be from 1 to 3 p.m. Saturday at Czaplewski Family Funeral Home, 501 Second Street NW in Hayfield. 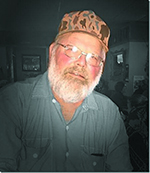 LeRoy was born Dec. 10, 1949, in Austin to Ervin Clarence and Evelyn May (Krulish) Pettis.  He served in the United States Army, fighting in the Vietnam War. On June 26, 1996, he married Nancy Ann Sobolik, also from Austin.

LeRoy worked at Hormel Foods until 1985. From there, he went to work for McNeilus Truck Manufacturing in Dodge Center. He retired from Albert Lea Winnelson Co. in 2015.

LeRoy enjoyed hunting, fishing and spending many summers at Dixon Lake Resort in northern Minnesota. He also enjoyed spending time with his dogs.

LeRoy is survived by his three daughters, Tonya (Eric) Gourley of Hines, Tara Odell of Des Moines, Iowa, and Jolene (Terry) Bauman of Cosmos; brothers Roger and Linda (Boysen) Pettis of Zumbro Falls and Rick and Ardi (Marsden) Pettis of Rochester; and grandchildren and great-grandchildren.

He was preceded in death by his wife, Nancy; and parents Ervin and Evelyn.