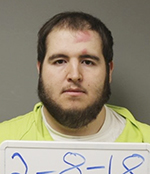 Lafountaine was charged after he strangled and sexually assaulted the victim Feb. 8 in Albert Lea.

In pleading guilty, Lafountaine admitted to the sexual assault.

Lafountaine was charged with first-degree criminal sexual conduct, but that charge was reduced.

Sentencing is scheduled for Nov. 19. Per the plea agreement, Lafountaine is expected to be sentenced to nearly 7 1/2 to 10 years in prison. After being released from prison, he will be placed on conditional release for the rest of his life due to a previous conviction for fourth-degree criminal sexual conduct.