Henry Joseph Kalis, 81, of Walters died Wednesday, Sept. 12, 2018, at Prairie Senior Cottages in Albert Lea. A funeral service will be at 11:30 a.m. Monday at St. Casimir Catholic Church in Wells. The Rev. Eugene Stenzel will officiate. Visitation will be from 1 to 4 p.m. Sunday at Bruss-Heitner Funeral Home in Wells and will continue one hour prior to the service at the church Monday. Military honors will be accorded by the Kiester American Legion post. The family requests memorials to the Alzheimer’s Association. Bruss-Heitner Funeral Home in Wells is assisting the family. To leave an online condolence, visit www.brussheitner.com. 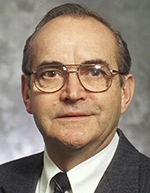 Henry Joseph was born March 2, 1937, in Easton, the son of Joseph and Loretta (Horn) Kalis. He was the youngest of three children. Henry graduated from Kiester High School in 1955, and farmed with his father until joining the Army National Guard, which he served in for four years.

He was united in marriage to Violet Rae Johnson on Nov. 28, 1959, at St. Theodore Catholic Church in Albert Lea. Henry assumed responsibility for the family farm and continued farming until retirement in 2013. He was elected a Foster Township officer, later became a Faribault County Commissioner and went on to be elected as a Minnesota state representative, serving in the Legislature for 28 years.

Henry was a recovering alcoholic who dedicated his time in sobriety by helping others achieve a life of peace and serenity.

Henry had a contagious sense of humor, which he shared with everyone. He also had a passion for education, focusing much of his career on helping others to achieve their goals. By being an organ donor, he continues to provide possible advancement in reach of Alzheimer’s disease.

He is preceded in death by his parents; brother, Francis; brothers-in-law Norbert Wanzek and Harlin Schow; mother- and father-in-law Martha and Arnold Johnson; and nephew, Fred Wanzek.