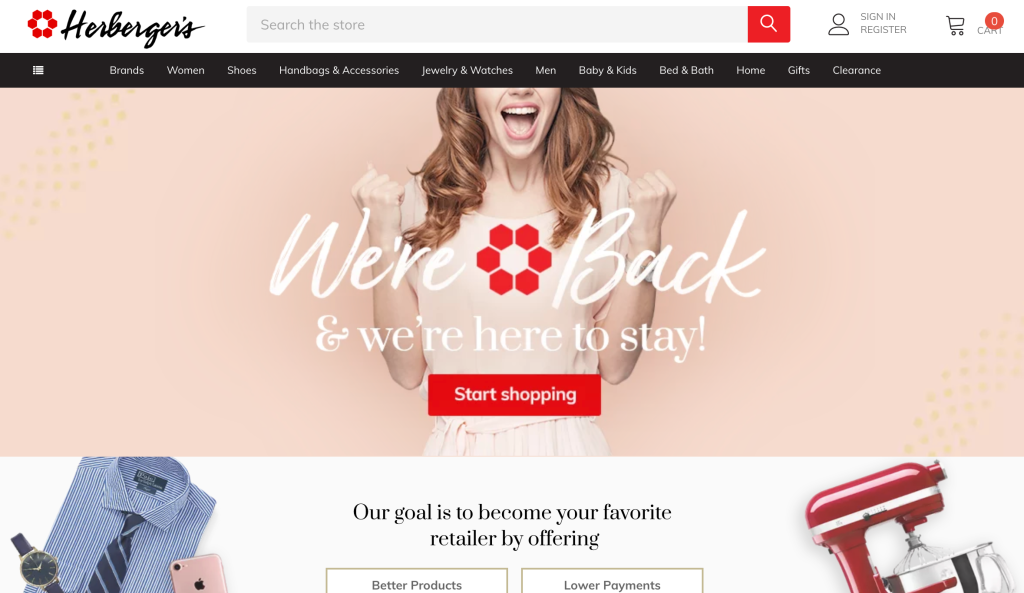 The Herberger's website — and all other Bon-Ton sites — celebrate the opening of their new online platform. Provided

Less than a month after Bon-Ton Stores Inc. closed all of its retail buildings across the country, the company launched a new online platform on Friday.

In a letter on the company’s website, Jordan Voloshin, the new president of Bon-Ton, talks about why his company, CSC Generation, acquired the business and what the company’s plan is moving into the future. The message could be seen on all Bon-Ton websites, including Herberger’s, Younkers, Bergner’s, Carson’s and Elder Beerman.

Voloshin said CSC Generation acquired Bon-Ton because it was inspired by the opportunity to “rebuild an American icon.” He said the love from customers was also evident, and he was impressed at the countless store employees who went above and beyond to help customers.

He said he spent many days at various stores talking to customers who were saddened because of the thought of losing their brand.

“Few companies are lucky to have customers who are this invested in its success,” he said.

Voloshin said Bon-Ton started in 1898 and since then has survived everything from the Great Depression to World War II.

“With a renewed focus on the customer, we hope to re-earn our spot in the community for the next century,” he said.

Bon-Ton in April announced it would close all of its stores nationwide as part of a liquidation of the company’s assets. Bon-Ton and its subsidiaries filed voluntary petitions for a court-supervised financial restructuring under Chapter 11 in February.

Albert Lea’s Herberger’s was one of 250 stores owned by the company that closed.

In addition to apparel and accessories, cosmetics and home furnishings available at the former Herberger’s, the website appears to offer expanded products, including furniture, appliances such as refrigerators and electronics.

The website states though many store locations have closed, Bon-Ton is in the process of opening new stores in Illinois, Wisconsin and Colorado. The first locations will be in Evergreen Park, Lombard and Orland Park in Illinois; Brookfield in Wisconsin; and Grand Junction in Colorado.

The headquarters is in Indiana.