Is Herberger’s making a comeback? Check out its website 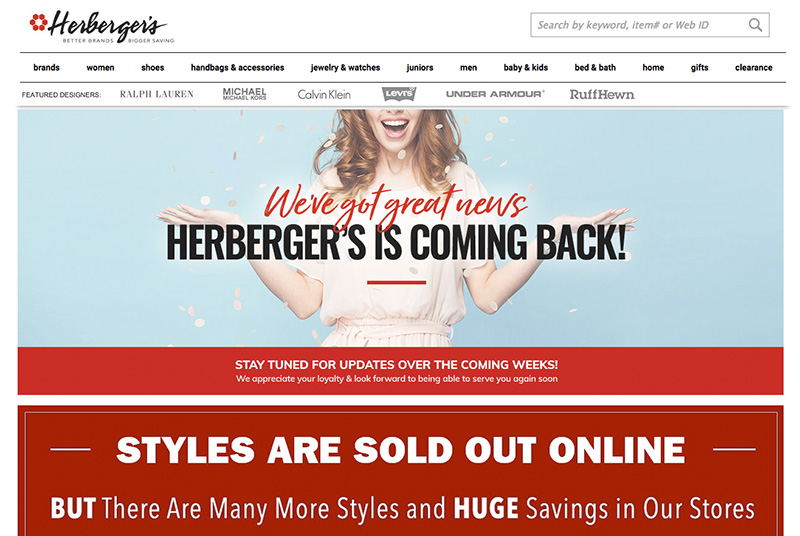 The photo on the Herberger's website has many wondering what the future is for the company. Provided

Only a few days after Herberger’s closed its doors in Albert Lea  and its other locations across the country, the company’s website is hinting at a comeback.

At the top of its site on Friday, the company posted an image stating, “We’ve got great news — Herberger’s is coming back!”

The same image and message could be found at the top of other Bon-Ton Stores Inc. websites, including the Younkers, Bon-Ton, Bergner’s, Carson’s and Elder Beerman nameplates.

Exactly what that means remains unclear, though the site states more information should be released in the coming weeks.

The announcement comes after Bon-Ton in April announced it would close all of its stores nationwide as part of a liquidation of the company’s assets. Bon-Ton and its subsidiaries filed voluntary petitions for a court-supervised financial restructuring under Chapter 11 in February.

At the time of the announcement, Bon-Ton operated 250 stores in 23 states.

Although many details have not been released about the store chain’s future, a Friday article in USA Today stated the rights to relaunch the retailer and its subsidiary brands are close to being acquired.

The reinvented stores would be a sleeker, more e-commerce focused business that is centered around its website with plans to reopen physical locations in Illinois, Colorado, Wisconsin and Pennsylvania, the newspaper stated.