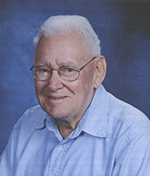 John was born in Albert Lea, where he lived until he graduated from high school in 1951. He was the son of Gladys and William P. Sturtz and the brother of William R. Sturtz, an Albert Lea resident, and Alice Strutz Kuehl, who is deceased.

While growing up in Albert Lea he made the first of many canoe trips to the Boundary Waters with his local Boy Scouts troop. He was active in a number of vocal  and instrumental groups in junior and senior high school, including a small group of eighth-grade boys called The Corn Cobs, which became locally famous when they performed nationally on the “Arthur Godfrey Talent Show.”

John attended Grinnell College, where he met his future wife, Bonnie Watters. He graduated from the University of Minnesota, where he earned a Master of Science degree in electrical engineering. Following his education, John had a 35-plus year career with General Electric Co. as a nuclear engineer.

John traveled extensively, visiting all 50 states and many foreign countries on all seven continents, including Antarctica. John was a clever woodworker who designed and built many projects, and always had a waiting list of projects his family requested. He was also a talented choral and instrumental musician. He sang with numerous choral groups, including Green Valley Community Chorus and the Tubac Singers. He also played saxophone with several bands, including Green Valley Concert Band and the Bavarian Brass Band. He enjoyed the outdoors, especially biking in the Sierra Nevada mountains and canoeing in the Boundary Waters Canoe Area in Minnesota and Donner Lake in California.

John was an active member of Desert Hills Lutheran Church, participating in various choirs and service groups. Throughout his life he volunteered with many community service organizations, including Valley Assistance Services. He spent the last day of his life in service to others.