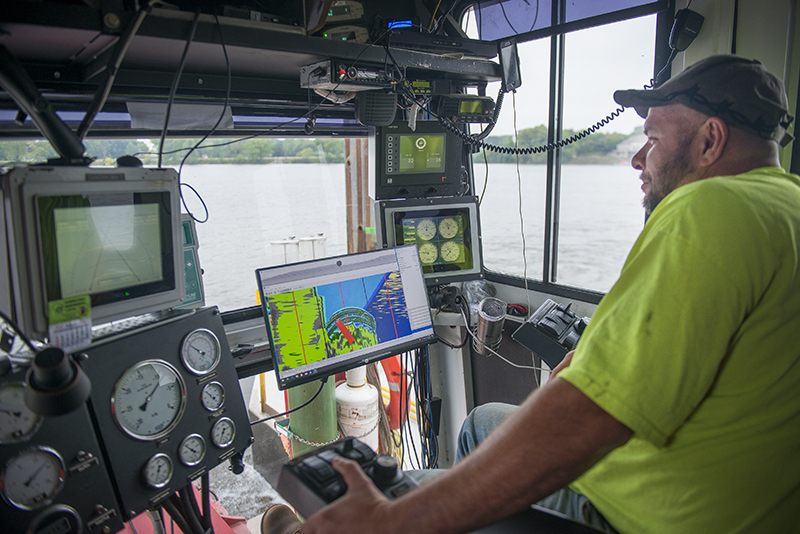 If dredging progress is any indication, the Shell Rock River Watershed District’s clock is running a bit fast.

Watershed District Administrator Andy Henschel said as of Wednesday, the district has dredged 196,000 cubic yards of sediment — this is a third of the total goal for phase one, JF Brennan surveyor Ryan Sands said. Sands said the project is ahead of schedule. 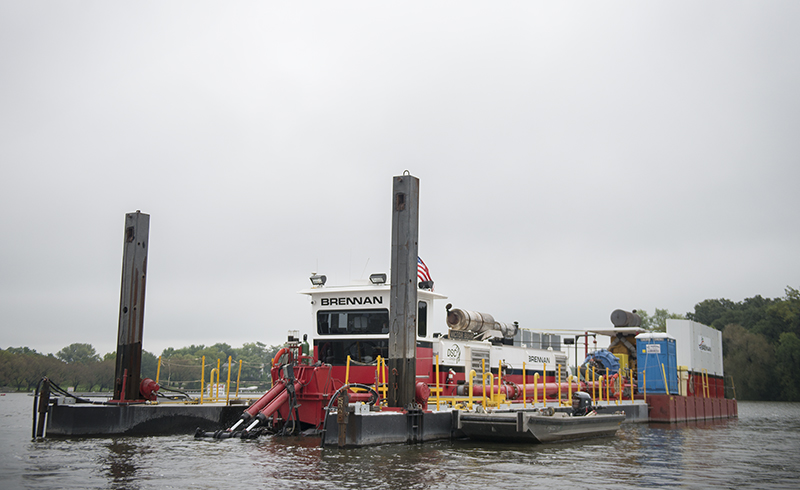 As of Wednesday, 196,000 cubic yards of sediment has been dredged out of Fountain Lake — a third of the total goal for phase one. – Colleen Harrison/Albert Lea Tribune

Phase one broke Edgewater Bay down into six areas, of which the dredge has completed area six and will finish area five within the next three weeks, Henschel said. The areas start at the southwest corner and move up and east.

The city’s aeration system was removed for the dredging and the district is working with the city to have it replaced, Henschel said. 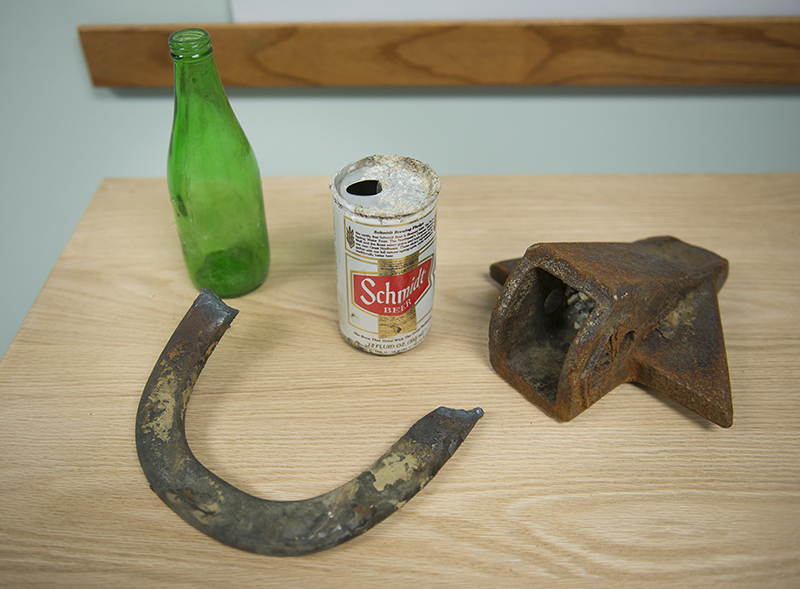 Pictured are a few of the items picked up by the dredge in Fountain Lake this summer. – Colleen Harrison/Albert Lea Tribune

Dredge operator Wesley Groth, one of the five-member team from Brennan conducting dredging operations for Edgewater Bay, said of his 14 years of experience dredging, Albert Lea’s project is one of the easier ones due to lower lake traffic and respectful boaters.

The tentative schedule has the district completing area four in November of this year. Henschel said the last day the dredge is on the lake will depend on when the ice arrives for the winter. 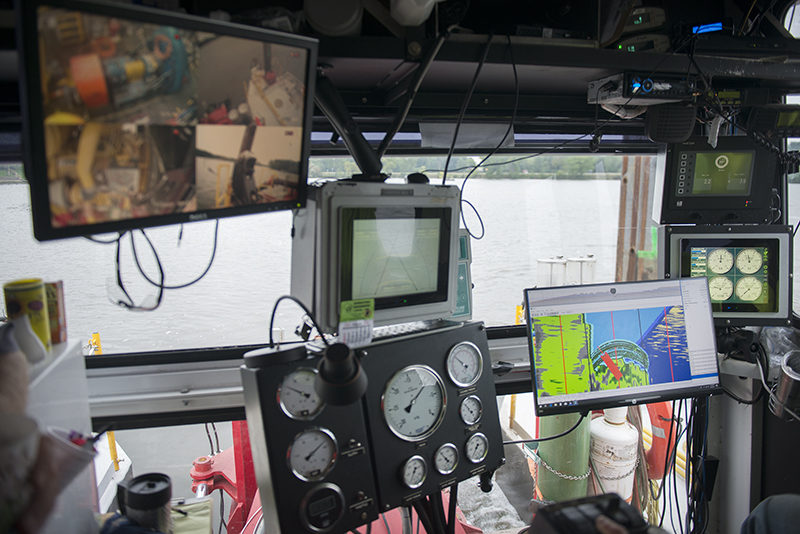 Groth has a number of screens and gauges to monitor as he dredges, including pressure and levels, among many others. – Colleen Harrison/Albert Lea Tribune

Since dredging began, Henschel said the district has made an adjustment to ensure the district hits its intended sweet spot of 617,000 cubic yards for phase one. Between the last bathymetric map, or map of the lake bottom, completed in 2009 — the one the Shell Rock River Watershed District and the Minnesota Department of Natural Resources used to discuss how much sediment could be removed — and the one done by Brennan prior to dredging, Henschel estimated there were roughly 60,000 to 70,000 additional cubic yards of sediment deposited in Edgewater Bay. 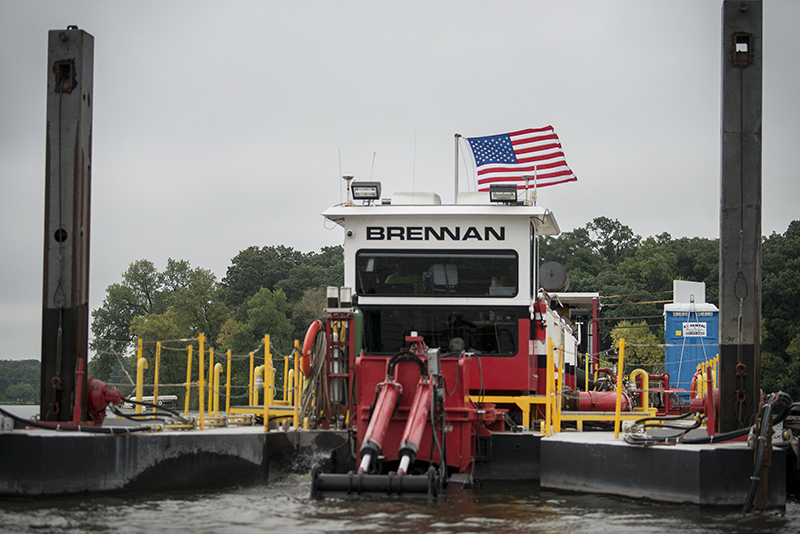 Albert Lea’s project is one of the easier ones dredge operator Wesley Groth has seen in his 14 years of experience. He said that’s due in part to lower lake traffic and respectful boaters. – Colleen Harrison/Albert Lea Tribune

To accommodate that additional sediment, the project shifts up three inches. According to Henschel, Brennan has a three-inch overage allowance below the target depth. Because of that extra sediment and the need to fit all that is dredged into the confined disposal facility, the previous target depth has become the new overage depth.

Henschel said the district monitors water quality at the confined disposal facility on a daily basis. He said wind has a greater effect than rain on sediment settling at the CDF. 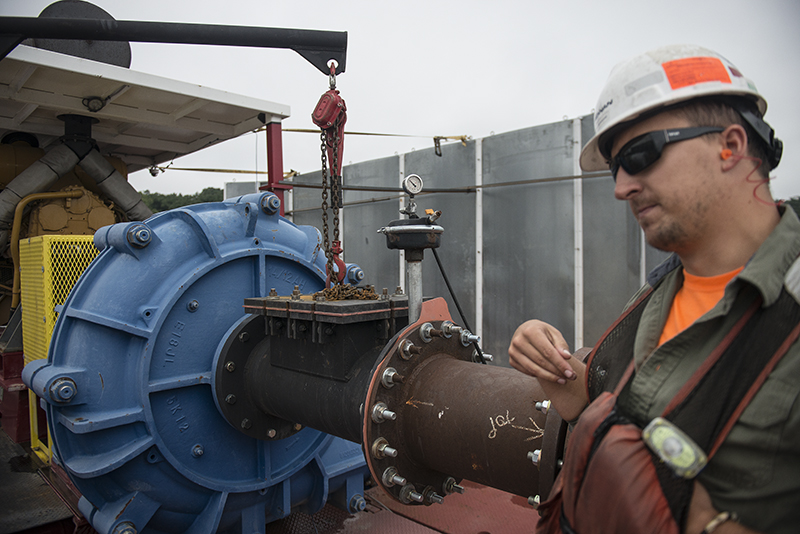 JF Brennan surveyor Ryan Sands said that as of Wednesday the Fountain Lake dredging project is ahead of schedule. – Colleen Harrison/Albert Lea Tribune

Earlier in the week, the district is able to discharge more water back into the lake because sediment pumped into the CDF from the previous week has had a chance to settle and allow water to be skimmed off the top to return. On Mondays, Tuesdays and Wednesdays, the rate of return is around 7,000 gallons per minute, while on Thursdays and Fridays the rate is closer to 1,300 gallons per minute.

Henschel said the district is looking ahead to phase two of the dredging process, which it hopes to bid out in October. 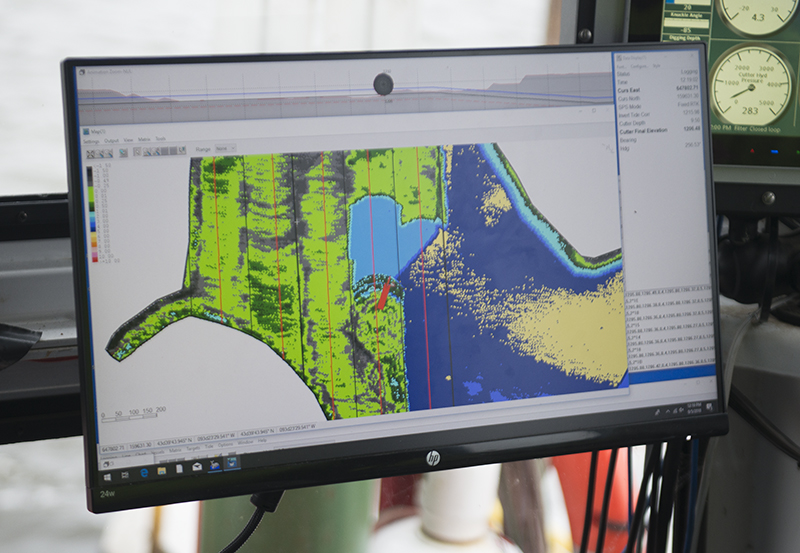 Green areas on the map pictured show what parts of Fountain Lake have been dredged. – Colleen Harrison/Albert Lea Tribune