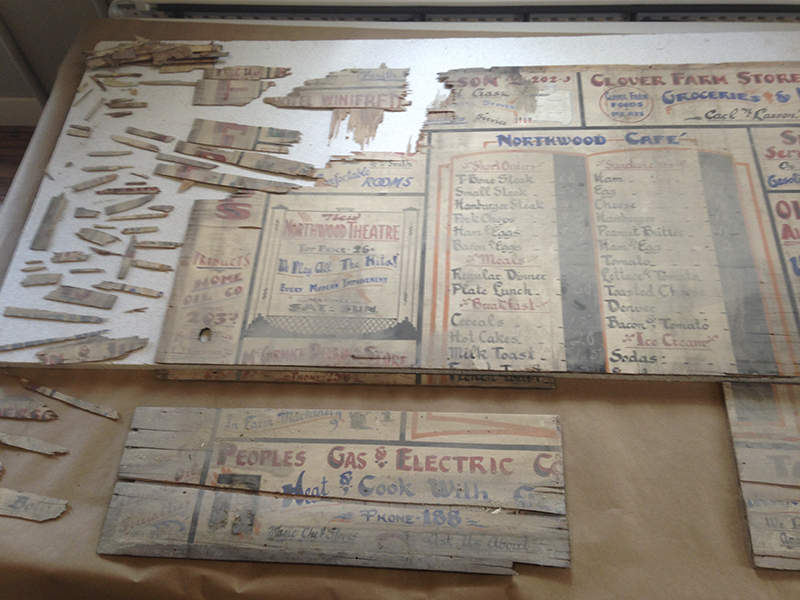 This 1940s hand-painted menu board was uncovered at Worth Brewing Co. in Northwood. - Provided

Worth Brewing Co. in Northwood will unveil a treasure that has been hidden underfoot for decades on Friday, according to a press release.

A hand-painted menu board listing lunch prices for The Northwood Café during the 1940s was uncovered during renovations three years ago.

“T-bone steak was 60 cents and the most expensive item on the menu,” said Peter Ausenhus, who with his wife, Margaret Bishop, owns Worth Brewing Co.

In celebration of the sign’s restoration, the first 25 customers will get 25-cent glasses of beer or root beer beginning at 5 p.m. Friday.

“We thought it would be a good kick-off to the weekend since Northwood’s Founder’s Day celebration is on Central Avenue on Saturday,” Ausenhus said.

In addition to listing lunch prices, the custom-painted boards were a common way for local retailers to advertise their wares and are considered valuable and rare commercial art today. There are a dozen businesses advertised on the board.

The board was eventually used as salvage lumber for a floor in either a repair or remodel. In 2015, carpenter Tom Hakes discovered slivers of painted wood as he was removing flooring in an apartment above the brewery during the renovation. To his credit, he carefully extracted the remaining 4-by-6-foot board and saved the dozens of pieces for later reconstruction.

The Northwood Café operated in what is now the brewery space from at least 1940 to 1954. Al Yankowiak was the operator and had several businesses in Northwood during the middle of the 20th century.

This historical jigsaw puzzle was completed by Ausenhus and represents the final piece of renovation of the IOOF-Erickson Building in the Northwood Central Avenue Historical District. The renovation won a Preservation Iowa award for rural historic renovation in 2016.